Ask.com Partners With NASCAR, Says “Super Verticals” Will Put It Back In Search Race

Ask.com — saying it plans to compete against the likes of Google, Yahoo and Microsoft — has announced a new “Super Verticals” strategy to take on its much larger rivals. These are specialized search engines that provide direct answers to factual questions. First off the mark? A NASCAR search engine. And yes, Ask also becomes […]

Ask.com — saying it plans to compete against the likes of Google, Yahoo and Microsoft — has announced a new “Super Verticals” strategy to take on its much larger rivals. These are specialized search engines that provide direct answers to factual questions. First off the mark? A NASCAR search engine. And yes, Ask also becomes the official search engine of NASCAR.

You won’t find the NASCAR search engine from Ask.com available yet. It will be released in conjunction with the Daytona 500 race on February 15, just part of an overall marketing plan that Ask hopes will attract NASCAR fans and keep them searching with Ask.

“There are clear marketing channels to reach NASCAR fans,” said Ask.com CEO Jim Safka. “If you’re going to do a NASCAR search, there’s only one place to go. If we can get large numbers of them to try, they’ll see we’re heads and shoulders above the others.”

The NASCAR search is the first of about a dozen other vertical search engines that Ask.com plans to roll out this year, Safka said. He wouldn’t itemize what these “super verticals,” as he called them, will be. But he said to expect more sports search engines along with other topics. The hope is that people will come for a particular topic but stick around to do broader searches.

“We’re going to systematically attack verticals, so by the time the year is over, people we reach will know that Ask is the best search engine on the planet when you have a search question in a particular category,” Safka said.

We’ll see. Vertical search engines have long been seen as a way that “newcomers” or others could break searchers out of the Google habit. But despite this, they haven’t seemed to help any of Google’s major rivals. For example, Microsoft pushed out a health search engine over a year ago; the Farecast travel search engine it bought last year was also positioned as a key vertical in the battle against Google. Neither has produced any noticeable gain for Microsoft.

Ask’s plan differs in partnering with a group that has potentially a dedicated audience for its particular searches. That marketing might help. Ask will power searches at NASCAR.com. It will sponsor a car in the NASCAR Sprint Cup Series. Ask is also exploring other marketing opportunities with NASCAR.

Ask’s new vertical is powered by extracting information from web pages across the web and from databases of information. Ask recently highlighted the technology used behind the scenes for this along with names and acronyms like DADS (Direct Answers From Databases), DAFS (Direct Answers From Search) and AnswerFarm. But other search engines do similar things, including places like Google and Hakia.

As I said, the NASCAR search isn’t live yet. For a taste of other Ask verticals out there now, the recipe search is interesting — though hard to find. Do a search on Ask, then click on “More” under the search box to select recipes (TV Listings and Events are among others offered). Of course, Google also offers a little known recipe search engine with far more extensive refining options than Ask currently provides (Ask says its service will be beefed up in the near future).

Since the ultimate goal is to get people using Ask for general searches, how are things on that front? Safka is adamant that Ask fully intends to compete in the general search space and has spent the past year increasing its speed, comprehensiveness, relevancy and freshness.

Unfortunately, there are no commonly-accepted metrics to prove this. Ask might be on par with the rest, better or worse. It’s hard to know.

I do know that right now, Ask doesn’t seem very fresh. Do a search, then click on the “cache” link for any page listed. Time after time, I can see that these cached copies are dated in mid-November. That should mean that the last time Ask visited these pages was weeks ago. For example, the cached copy of CNN.com’s home page is dated November 18, 2008. If that’s the last time Ask visited that site, it’s pretty stale (both Google and Yahoo last visited CNN.com today; Microsoft two days ago).

I also had a pretty dim view of Ask’s recent arbitrage activity (see Ask.com Plays The Google AdWords Arbitrage Game), which it dismissed as an oversight, despite having run for months. To me, that was a further sign of what I wrote last March, that Ask was pretty much out of it as a major search engine and headed down the path into the secondary market (see Obit: A West Coast Digerati Deadpools Ask.com).

Since that time, Ask has been diligently trying to win back the support of blog influencers (see Lisa Barone’s My Thoughts On Ask.com & Core Search and Barry Schwartz’s Sorry, Ask.com — I Still Don’t Think You’re Focused On Core Search). Safka’s message when I spoke with him today remained along the same lines — we matter, we care about search, and we’re planning a smart game to win back searchers.

As I said before, we’ll see. It will take a lot more than words for Ask to prove it’s still in the game. And while a NASCAR partnership might be smart, it continues to still do dumb things like this: 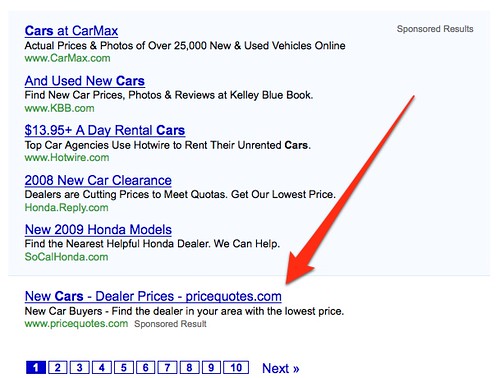 Those are the ads that appear at the bottom for a search on cars. Notice how there are five within a shaded box marked “Sponsored Results,” then underneath that is another ad outside the box. Why’s it outside the box?

My assumption is that Ask hopes some searchers will miss that it is an ad, click on it and generate revenue. Yes, it does have a “sponsored results” label, keeping with FTC guidelines for search ads. But those guidelines also urge that paid listings be separated or clearly delineated from the unpaid results. Putting them in a box does this; leaving one out makes no sense, other than to confuse the searcher. And that’s not a good thing for a search engine to be doing when it’s trying to rebuild its reputation.