Here are two scenarios that are currently keeping many PPC advertisers up at night — maybe you’re one of them:

Cases of one player monopolizing ad share happens more than you may realize, often devastating the once-successful paid search performance of smaller advertisers left in their wake.

But aren’t Double Serving policies written to prevent this type of monopolization from happening? It turns out, not really. Google and Microsoft’s policies don’t seem to protect smaller advertisers from either of these scenarios.

J2 Global Communications has acquired the bulk of websites that offer online faxing services, including  eFax.com, Fax.com, MyFax.com and SmartFax.com.  The company has been accused of taking aggressive measures to crush competition. But does the company’s paid search strategy violate double serving policies? Below are screenshots of recent search results for “online faxing” on both Google and Bing. The ads in red boxes are by sites operated by J2. Now, here’s another example of a parent company operating and advertising sites within the same vertical. Build.com runs a network of sites including LightingDirect.com, HandleSets.com, VentingDirect.com and FaucetDirect.com. The company also owns additional sites within each of these verticals. Below is a screenshot showing how the company can monopolize the top ad spots for a search query — in this case “faucets”. The company owns FaucetDirect.com, Build.com and Faucet.com. 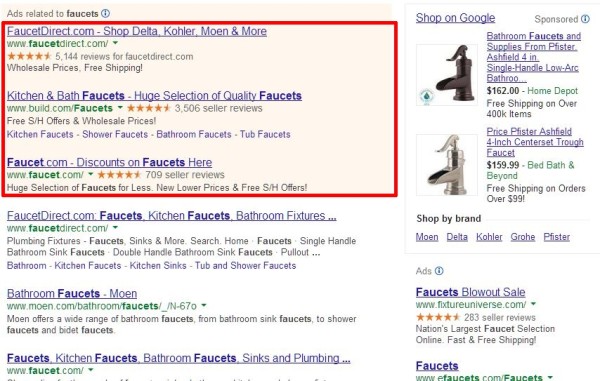 On the face of it, these examples above appear to violate of Google and Bing Ads’ double-serving policies. Upon closer reading, it is clear the search engines leave much to their discretion.

To provide the best possible user experience, Microsoft reserves the right to disallow specific ads or sites for offering a redundant user experience if the search results are too homogeneous. For example, we may disallow ads that link to websites whose content is too similar.

Multiple ads from the same advertiser may be displayed if the target site for each ad has:

Notice the language does not explicitly say duplicate ads WILL be disallowed; Microsoft “reserves the right” and “may” disallow ads for sites it deems too similar. Microsoft also doesn’t mention anything about common ownership of the websites.

Looking at the bullet points in the policy: the various J2 and Build.com sites do have separate branding and all have a unique look and feel from the other sites. Bullet number three, “Different products and services”, is where things get fuzzy. Obviously, it’s in the best interest of the user to serve ads for sites offering faucets on a search for “faucets”. However, the inventory and pricing on Faucet.com and FaucetDirect.com are identical, so it seems unique branding and look and feel trump the different products stipulation.

Microsoft was quick to issue a statement when I asked for clarification. A Microsoft spokesperson said,

“We remove specific ads or sites from showing on a query when they provide a redundant consumer experience. Multiple ads from the same advertiser are allowed provided that they are marketed as a distinct experience with a unique look and feel. We do not take into account parent or affiliate company relationships, as each of these sites have unique landing pages. For example, we would not block Amazon and Zappos from bidding on the same terms, despite the fact that they share the same parent company. For more information, please see our ad content and style guidelines.”

So it seems clear that both scenarios we’re looking at — J2 and Build.com — are not considered violations Microsoft’s Duplicate Ads policy. As long as the branding and experience are different, Microsoft most likely won’t take issue with duplicate ad serving by a parent company that either acquires competing sites or launches sites that carry the same inventory within a vertical.

Google is where the real financial impact is felt by advertisers who find themselves getting squeezed out of the auction. Google’s Double serving policy appears fairly straight forward, however, in practice it’s anything but (again, emphasis mine):

To protect the value and diversity of the ads people see on Google, we generally discourage advertisers from running ads for the same or similar businesses across multiple accounts triggered by the same or similar keywords. This policy, known as “double serving,” prevents multiple ads from the same or commonly-owned company from appearing on the same search results page.

Again, note the lack of clear directives such as “prohibit” instead of “generally discourage” and “must” instead of “should” in the policy.

Let’s look at how our two scenarios stack up against Google’s policy:

Common Ownership, check. In both cases, J2 and Build.com are transparent in their ownership of these websites. All sites are registered to their respective parent company in WhoIs.com; the footers on each of the sites include either the logo or registered name of the parent company.

Next, Common Ownership needs to be coupled with at least two of the bullet points to indicate “Violations of this policy”.

Common Product Offerings, check. Similar pricing, check. Again, in a spot check of Pricing on the Build.com sites, the prices are identical, and the pricing on the J2 sites are within Google’s 25 percent threshold.

Bonus points for Similar Customer Support Experience is harder to pin down. It’s likely these companies have consolidated customer service teams (and this point applies to customer service, not the actual sales process) so it’s nearly impossible for Google to determine without proactively contacting the companies.

That leaves Brand as the sole differentiator among the sites and the only point for which the sites aren’t in clear violation of the policy. It seems, despite how the Google policy is written and that in these two cases at least two of the three criteria have been met, branding trumps everything.

No Clarification From Google

Unlike Microsoft, Google declined to issue a clarifying statement. This silence, more than anything, is what’s so maddening for advertisers that find themselves getting shut out of the auctions by larger parent companies. One advertiser, who declined to be named, told me that after they presented Google with their findings about the J2 ads several months ago, were told, “We’ll look into it, but you won’t know what we decide one way or the other”.

Here’s what I have learned while researching this: Google won’t provide any further clarification or comment on the double serving policy. The company leaves it to its discretion of when and how to police potential violations. If an advertiser has reported a violation and nothing is done about it, then they should interpret that as Google did not classify it as a violation and has given tacit approval.

In other words, the fact that the J2 and Build.com ads are still running means Google decided they aren’t in violation of the double serving policy. This, in turn, seems to prove that distinct branding and unique logos are the only aspects of sites that Google really considers when deciding if ads violate the Double Serving policy. And yet, even then, the policy is often not enforced.

David Veldt highlighted a number of apparent double serving violations on his Interactually blog in July. It’s still easy to find many of them. Here’s just one of his examples that I was able to replicate today.  The Terminix “offers” site is not an affiliate; both Terminix domains are registered to parent company ServiceMaster in Memphis, TN. Both landing pages have the same $50 off offer.

This is just one case that violates every bullet on Google’s policy, and yet, these ads have been running for months.

Mixed Signals Cause Even More Confusion

The reality is the double serving policies weren’t designed t0 keep parent companies from advertising their various brands and sites. They were written to keep companies (of all sizes)  from trying to cheat the system by cloning their sites or running various versions of landing pages in order to hoard all the ad spots. The real problem is Google’s Double Serving policy causes more confusion and frustration than it should, in part by the way it’s written, but in far larger part because the company seems uninterested in enforcing it with any uniformity.

Here’s one example in which the policy actually was enforced: In August, after an AdWords community contributor reported that a fairly small company was running ads for two sites — BritishFoodShop.com and BritishFood.com — Google did find it was in violation of the double serving policy. This despite the fact that the sites have different branding and design.

It begs the question, how is this situation any different than Faucet.com and FaucetDirect.com other than the size of the company buying the ads? The advertiser that reported the violation finally got results by posting the case with screenshots on the AdWords Community forum. The complaint encapsulates what I’ve been hearing from advertisers who find themselves facing these situations:

As an Adwords user, i’m curious and frustrated when I see someone violating the double serving policy. Whats more frustrating is when we report it several times over the years, wait patiently for Google to correct the issue but nothing gets done. It makes it difficult for us to compete and drives up our advertising costs.

For whatever reason, this time the complaint was heard, acknowledged and the duplicate ads were taken down. So, if you’ve been complaining about a specific case to Google but received no word, you might try the AdWords Community Forum. If you still hear nothing, it could be time to move on and redirect some of that paid search budget to other channels.

See what marketers recommend to advertisers getting the PPC squeeze in an article on our sister site, Marketing Land: Now What? When New Competition Suddenly Makes PPC Unprofitable

(Image by Mike Fleming and used via Creative Commons licensing.)