Google Switches AdWords Color Back To Yellow From Purple

In July 2010, Google changed the color of the AdWords background from yellow to purple. Now, less 7 months after the switch, it appears Google has gone back to the yellow color. 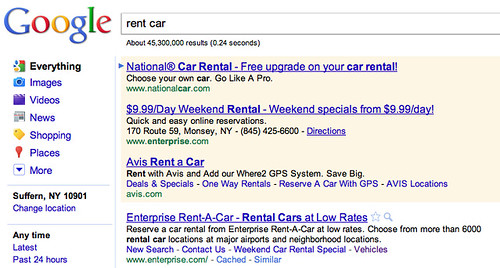 Google has not officially announced this change yet, but it seems like everyone is now seeing the yellow background colors.

When Google moved from yellow to purple, they told us:

Starting today and ramping up to 100% globally by the end of this week, we’ll be changing the background color for ads that appear above the search results on Google.com as well as our local domains. The ads, which currently have a pale yellow background, will change to have a pale purple background. This change is part of the ‘look and feel’ update to our color palette and logo that we made back in May of this year to keep the Google results page looking fresh and modern. This is purely an aesthetic change to our ads and won’t have any impact on the way we target or serve advertisements on Google.com.

Let’s not forget, before the purple was yellow, before the yellow was blue and Google has tested many combinations including green and blue with yellow.

Postscript: A Google spokesperson confirmed the change and said it will be rolled out globally within the week. “I can confirm the change, which should be fully rolled out globally by the end of this week on Google.com as well as our local domains,” Google told us. Google added, “this is purely an aesthetic change and won’t have any impact on the way we serve advertisements.”