Tech consulting firm IDC has predicted that Google’s mobile operating system will become the dominant mobile platform this year, achieving a global market share of 39.5 percent. The next in line would be former global leader Nokia with 20.9 percent. Apple comes in at 15.7 percent. Windows Phones to Overtake Apple (via Nokia) These figures […] Tech consulting firm IDC has predicted that Google’s mobile operating system will become the dominant mobile platform this year, achieving a global market share of 39.5 percent. The next in line would be former global leader Nokia with 20.9 percent. Apple comes in at 15.7 percent.

These figures are very aggressive in terms of Android’s share and Nokia’s decline. But they’re consistent with the remarkable growth that Android has enjoyed over the past year.

By 2015 IDC projects that Google will own 45.4 percent of the global smartphone market. The next largest player would be Windows with 20.9 percent — based on Nokia’s adoption of the Microsoft operating system. If that in fact happens Nokia and Microsoft’s gambit will have paid off.

Interestingly RIM (BlackBerry), just behind Apple at 14.9 percent this year, remains relatively stable through the forecast period, winding up with 13.7 percent of the global market in 2015. 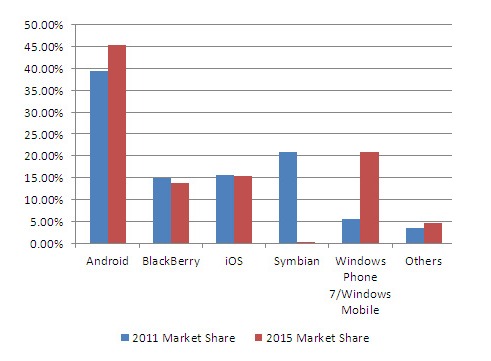 I think these numbers are potentially problematic for the following reasons:

Windows Phones appear to be selling modestly well, though not in the US market. We’ll have to wait (until 2012 apparently) to see the outcome of the “Nokisoft” collaboration. Microsoft must continue to build its library of apps, which recently crossed the 10K threshold, to maximize its chances of success with Windows Phones.

Right now, in the absence of the Nokisoft phones, there no evidence that IDC’s Windows Phone market share prediction will come true.

With a few exceptions Android devices are Google search devices and drive mobile search volumes accordingly. Google dominates mobile search today by a margin the size of the Pacific Ocean (according to StatCounter): 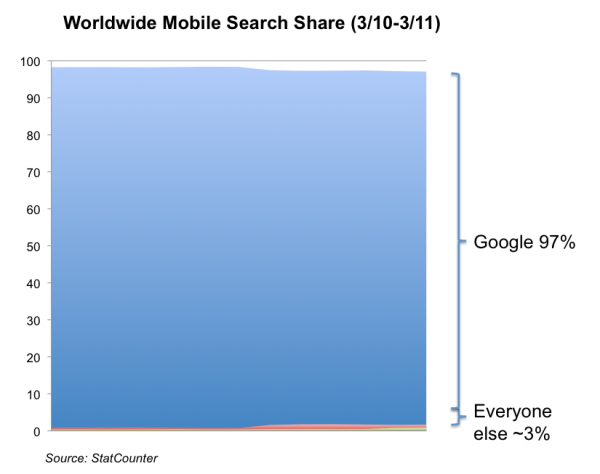 All of this is browser based search of course. And there are hundreds of millions of mobile queries coming through apps that almost nobody is tracking right now.

Yet Google is overwhelmingly the leader in mobile search share and associated revenue, far exceeding even its dominant position on the PC. In mobile display Google is also the revenue leader in the US, according to IDC — followed by Apple (with iAD) and then Millennial Media.

If IDC’s handset sales projections come true Google will continue to enjoy near-total dominance of browser-based mobile search ad revenue, which will run into the billions by 2015. (Google also enjoys search dominance on the iPhone as well.) Its ownership of AdMob will also give it a potentially dominant position in global display advertising on Android devices — though this is less assured.

At this point Android’s success has wildly exceeded Google’s most optimistic scenarios. In fact it’s so successful that Android is likely to become a target of regulatory and antitrust scrutiny at some point in the next couple of years.