Google’s treatment for local businesses without public storefronts has never been good, and their suggestions for them have vacillated over time. For service professionals using P.O. box addresses, the situation is confusing, as (it appears) Google penalizes some, but not others. To understand the current situation and understand options, read on. Google Maps has had […]

Google’s treatment for local businesses without public storefronts has never been good, and their suggestions for them have vacillated over time. For service professionals using P.O. box addresses, the situation is confusing, as (it appears) Google penalizes some, but not others. To understand the current situation and understand options, read on.

Google Maps has had a built-in bias for some years against business types which do not operate from a publicly-disclosed office location. Such businesses can include building contractors, roofers, painters, chimney sweeps, locksmiths, electricians, lawncare services, and many more.

Google has often left these companies out in the cold as their algorithm prefers displaying companies’ pinpoint locations, and companies which didn’t want to show their address, did not have that information displayed. Also, their application of rules against roaming local businesses is inconsistent, uneven, and unfair.

Google’s advice on how these businesses ought to market themselves has further caused confusion, as Google has waffled back and forth — resulting in many well-meaning small businesses getting themselves dinged by lower rankings or outright suspension of their listings.

For example, this listing for a computer service company in Boulder, Colorado, is shown as a red dot hovering over the map area, instead of the pinpoint icon: 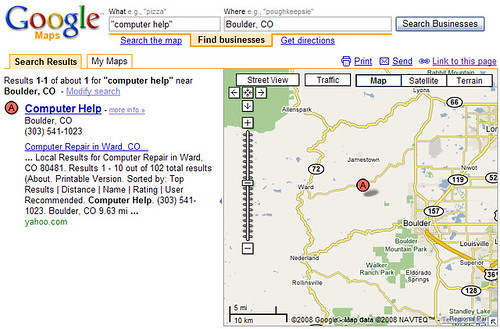 Confoundingly, businesses without addresses were not allowed to add their listings directly to Google back then, so they had to try to add it into the various Internet yellow pages and other data partners which Google might then absorb and display.

I previously reported on how Google Earth’s VP, Michael Jones, had confronted a question about “how should addressless companies get into Google Maps?”, and he’d said that such businesses could rent local post boxes, and use those addresses. A short while later, Greg Sterling quoted Google’s Director of Product Management for Local, Carter Maslan, as saying virtually the same thing:

“SEL: What about cases where people want to appear in results for areas where they don’t have a physical location (e.g., a “service area”). Is Google going to address that scenario?

CM: Yes, we will. We currently don’t allow for service areas, but we recognize that many businesses don’t have physical locations and are working to accommodate those businesses. We recommend that businesses without a physical location register themselves as a single business listing using a PO Box.”

I was very optimistic when Matt McGee reported on how Google rolled out Service Areas earlier this year in a limited test to begin addressing the issue.

A few weeks later, Google’s Ari Bezman added a post on Google’s LatLong blog about it, saying that “Not all businesses serve their customers from a brick-and-mortar storefront,” and that some may operate out of their homes and travel around town to provide services. He indicated that the new service area features would allow such businesses to have listings in Google Maps, specifying the areas for which they’d travel to serve, and also enable them to suppress their address location from being displayed.

Fast forward to December of 2010, however, and you’ll quickly find some disparities in Google’s messaging and stance on the matter.

“Google Places is meant to facilitate customer interaction with brick-and-mortar businesses and service providers. Therefore, the business owner or employee who is officially authorized to represent their particular business location must have a physical address in order to comply with our quality guidelines.”

In other words, the very same local businesses which are most frequently going to want to use Service Areas are also ones that traditionally might have preferred to list P.O. boxes in various business directories in lieu of listing their home addresses.

If you are one of the companies affected and every one of your competitors in your service area were treated identically, this situation might be a little easier to take.

However, you don’t have to browse around in Google Maps much before you find listings which use only a P.O. box as address. Here’s an example for the Beltway Lock Service in Houston, Texas — I found this only a couple of pages deep in Google Maps for a search for “Locksmiths, Houston, Tx”: 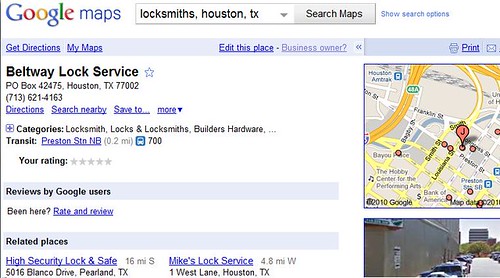 Obviously, this listing doesn’t comply with the Google Places quality guidelines. Equally obviously, Google has not chosen to remove the listing from the SERPs, even though it would be child’s play to detect any listings containing “PO Box” addresses and remove them en masse. If it’s against the quality guidelines, why are these listings allowed to appear at all?

I’d conjecture that if the listing has been around for some length of time in the databases of various business listing aggregator services that Google has partnered with, they may be choosing to trust those listings above newly-submitted business listings.

However, from the viewpoint of address-less businesses which are trying to get listed in Google Places, this is not a fair situation, and Google is not treating businesses equally.

Much as with the legal fine-print of software usage licenses, busy people will often skim or not read guidelines and instructions. So, it’s no surprise that there are many dozens of Google Places Help questions regarding businesses which got penalized from using a PO Box address.

While it’s easy to dismiss these people for not being careful in following the written rules, a bigger question in my mind is why Google allows them to submit their listings containing “PO Box” character strings, when it would be so easy to detect and alert the user as part of regular submission form verification.

For some of these people who may have read our articles on Search Engine Land over time on local marketing, this may also be confusing. As you can see, we’ve quoted Google representatives a number of times in the past as stating that people without brick-and-mortar business storefronts should use PO Boxes.

Also, it’s sort of insulting to a business owner to imply that their business is of unacceptable quality because they use a post box — post boxes have been in use since 1635, so the practice was well-established before Google and the Internet existed. This is why that part of the guidelines is simply nonintuitive.

If a business does not have a street address, such as a home address, which they might use for verification purposes, it’s not particularly fair to require that they disclose that to Google, nor is it fair to make them have to contract to use another street address just to get equal footing in Google with their competitors.

Even more irksome, the guideline appears to penalize the honest businesses more than the spammers or less-ethical businesspeople. I’ve run across a number of cases where people have set up completely fake addresses in order to achieve placement in Google.

Some instances involve using addresses of existing shopping centers or office buildings, while in other cases people have gotten addresses in parks, cemeteries and random places along streets. (Mike Blumenthal has also reported on one address hack that can allow people to obtain listings using a fake address.) I’ve further received complaints from businesses which have been edged out of search results with numerous listings based on false addresses.

Consumers are noticing in some cases, too. One reviewer in Google Maps writes, “Owner was rude when I asked about their false address listings in Google Maps all over town!” In that instance, I viewed the Street View picture for the business’s street address location, and found a new apartment building under construction. While it’s possible the building was completed since the photo was shot, I suspect there’s no locksmith housed there at all.

Finally, as icing on the cake of frustration, the issue is further exacerbated by Google’s lack of clear messaging when a business unwittingly submits a listing with a PO Box address. A number of possible results are described in the Google Places Help Group, including suspension of the account or having the listing pushed down very low in the search results.

The listing may be accessible via extremely specific search queries that only would apply to them, such as search by business name, but be otherwise absent from more general search requests. Without clear messaging around the penalization treatment, there are probably quite a few businesses which don’t even realize they didn’t follow the rules or may assume they’re not ranking well because of other factors (quite a few small businesses might submit their business listing and then only check to verify it’s still there by searching on their business name and city).

It is difficult to try to limit false address listings from brokers who may be pretending to be local businesses — I totally get that.

However, Google needs to do a few things to improve the situation.

The first, simplest step would be to add a basic few lines of Javascript to their submission forms to warn people from providing listings with P.O. Box addresses, and block them from submitting such listings which will only get penalized. It’s just ridiculous to invite people to submit their listings only to block them from appearing in SERPs when you could tell at the inception if it’s got an obvious and easily-detected problem.

Second, Google should equally penalize all listings founded upon P.O. Boxes if they’re going to penalize for this at all – not hard to detect and flag. (In fact, if they would halt displaying all of the business service categories that are frequently address-less, then it would create more equal footing for those companies to compete in the non-local search results. If you can’t handle the local business listings for a category, don’t show just the fraction of listings that meet the arbitrary rule.)

Third, Google should work on rolling out a solution which may allow local businesses to use P.O. Box addresses if they so wish. It’s not clear to me why Google would not show post boxes and just encourage them to suppress address and choose service areas — since it hasn’t stopped the spammers, stop punishing the innocent along with the guilty. The difficulties for businesses which are traditionally address-less have been extant in Google for too many years at this point — the problem truly should merit higher levels of prioritization compared with rollout of new features.

If you are a business that is dealing with this issue, there’s not a whole lot of options at present. You could set up an additional mailbox somewhere else other than the U. S. Postal Service office near you — there are mail services which provide a street address matched with a suite number which would satisfy the rule by not containing the apparent “poison pill” of the “P.O. Box” character string. (Unfortunately, this is not a solution for many businesses located in rural areas where there are no alternatives for postal box services.)

Finally, you could choose to wait out the situation or hope that Google might eventually accept your address despite it running counter to their rules. Perhaps they will finally accommodate PO Box listings. If you’re negatively affected by this, outline your situation in the comments on this post.