Former Googler Daniel Gilbert has an improved script to let you adjust your AdWords bids -- desktop and mobile -- every hour of every day. 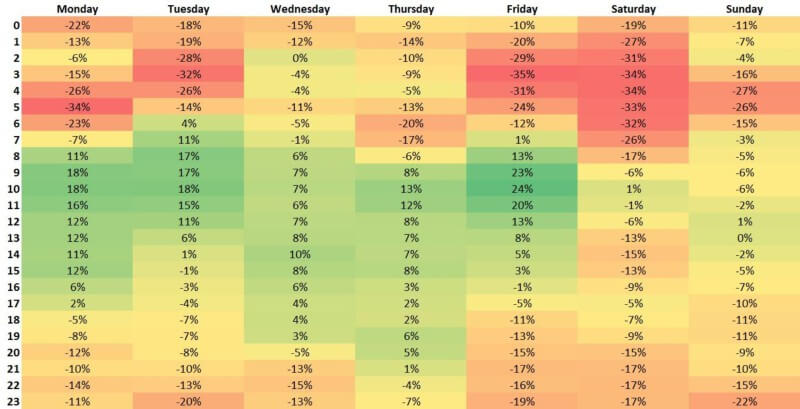 Customer behavior changes at different times of day. AdWords ad scheduling, with only six unique bidding windows per day, doesn’t come close to the granularity we need to make our AdWords accounts shine. Most third-party bidding tools only allow two or three bid changes a day.

In response to this, I shared an AdWords script built by the team at Brainlabs (my employer) a few months ago which lets you optimize bids for every hour of the day.

Based on comments from Search Engine Land readers, we’ve beefed up our AdWords script, which you can now use for Google Shopping or regular campaigns. It also lets you change your mobile bid adjustments every hour – currently there is no other way to do this! You can find the script below: all you need to do is copy and paste it into your AdWords account and read the instructions to configure it to fit your needs.

The script works by looking up the bid modifier for each hour from a Google sheet. Make a duplicate of our example spreadsheet and set all the bid multipliers to the values you require. The first sheet in the spreadsheet will correspond to your ad scheduling (applied to all traffic) and your second sheet will correspond to your mobile bid adjustments.

Note that, unlike in the previous version of the script, the bid adjustment you type into the spreadsheet is the same as you would enter into AdWords: 0% means bids will be unchanged, so a $1 bid would stay $1; -10% means bids will be reduced by 10%, so a $1.00 bid would effectively be $0.90. You can also now use the script to turn off advertising at certain times: just put the bid adjustment down as -100%. (You can’t actually have a -100% modifier in an ad schedule, so if there’s a -100% in the ad scheduling sheet the script simply won’t create a schedule for that time slot.)

Also remember that mobile bids will be affected by both the ad scheduling sheet and the mobile sheet: if you have a bid of $1, the ad schedule adjustment is -10% and the mobile bid adjustment is -10%, then the effective bid on mobile would be $0.81 (as the adjustments multiply together to give -19%). To help you keep track of this, there’s an additional table in the mobile sheet for the compounded change. You don’t have to do anything to this table: it will be filled in by formulae.

Once you’ve copied the script into your account you will have to set the following options:

We’ve set the default value of shoppingCampaigns to false, so if you’d like to run this script over Shopping campaigns rather than regular campaigns, make sure to change this variable. If you’d like the script to work over both types of campaigns, then simply duplicate the script and have two instances running in your account.

Once the settings have been configured, you’re ready to set up a schedule for the script: set it up to run hourly.

When you no longer want to use this script, simply set the lastRun variable to true and run the script once. This will remove all of the ad schedules and set all campaign mobile bid adjustments to 0%. Also remember to stop the script’s schedule, so it doesn’t carry on running every hour.

There are a few things to note: