Today in 72 US cities, Microsoft is introducing what it calls “ClearFlow” on Live Search Maps. It’s an improved traffic and routing service that relies on machine learning and predictive modeling to offer better traffic and routing information to consumers across the US. Microsoft employee and artificial intelligence expert Eric Horvitz initiated the project in roughly 2003. He told me that over a four year period Microsoft provided GPS units to employees to monitor and record the traffic patterns in the Seattle area. The company collected enormous amounts of data on traffic, and that learning formed the basis for ClearFlow.

In addition to real-time traffic data, the service offers traffic predictions across highways and improved information on secondary routes and surface streets. Horvitz said that this predictive modeling has proven to be very accurate in Microsoft’s ongoing development and refinement of the program. Based on artificial intelligence, as well as dynamic traffic monitoring, ClearFlow appears to be quite a bit more sophisticated than competing systems.

Traffic and directions has become a critical, competitive area for all the major search engines. However, the depth of what’s behind ClearFlow is not going to be apparent on the surface to ordinary users, who will just see traffic revealed on Live Search Maps or get directions. Many people will be inclined to use the service they’re already familiar and comfortable with. 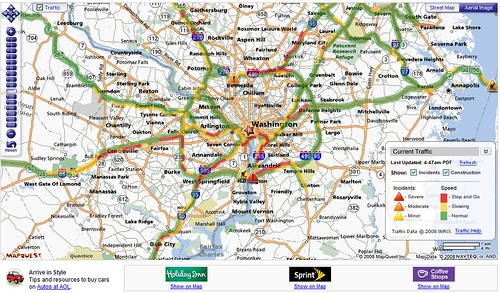 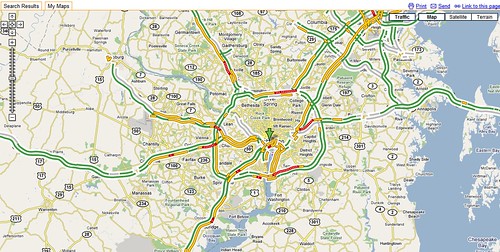 Through word of mouth and experience people may gain an appreciation of some of the improvements and nuances of ClearFlow. Horvitz also told me that ClearFlow would be integrated into Live Search Mobile and other Microsoft mobile applications, including in-car navigation and personal navigation devices. This arena (mobile) is where routing improvements may be immediately apparent to consumers.

Although I didn’t confirm this with Microsoft, I imagine that the ClearFlow data and routing would be made available to Microsoft partners and third parties using the Virtual Earth platform as well.