Google Health has been an open secret for more than a year. Last week the company announced a pilot program with the Cleveland Clinic as a prelude to a formal announcement of the service. That formal announcement came this morning at the Healthcare Information and Management Systems Society conference in Florida, in a keynote from […]

Google Health has been an open secret for more than a year. Last week the company announced a pilot program with the Cleveland Clinic as a prelude to a formal announcement of the service. That formal announcement came this morning at the Healthcare Information and Management Systems Society conference in Florida, in a keynote from Google CEO Eric Schmidt.

Google’s Marissa May wrote the Google Blog post this morning on the service. There’s also coverage in the Wall Street Journal.

Microsoft and Revolution Health, among a few less well-known others, offer personal health profiles online, and it’s fairly clear that this is the direction that the entire healthcare industry is moving. But here’s what Google’s Marissa Mayer says “sets Google Health apart”:

Specifically on the most important of these issues (privacy and security), Mayer says:

Due to the sensitive and personal nature of the data that will be stored in Google Health, we need to conduct our health service with the same privacy, security, and integrity users have come to expect in all our services. Google Health will protect the privacy of your health information by giving you complete control over your data. We won’t sell or share your data without your explicit permission. Our privacy policy and practices have been developed in thoughtful collaboration with experts from the Google Health Advisory Council.

Those who think Google does a good job with data privacy and security will likely be satisfied with these assurances, but cynics and skeptics will not. My concern is not that Google will make every effort to protect user data, but that unscrupulous third parties will try and get at it: private litigants, would-be employers, and US insurance carriers trying to minimize their exposure.

There’s also the question, which Mayer doesn’t address in her post, about advertising. Google is not likely to exploit any of this personal health data for advertising purposes. Google recognizes how foolish and potentially damaging that would be to its relationship with consumers. However, many skeptics see this as one of Google’s motivations in creating Health.

Then, on a mundane level, there’s the question of getting doctors and third party institutions to use the service. I have had personal experience in spending almost two hours filling out a detailed health profile online, only to be told later that I had to provide the same information again on paper forms in the doctor’s office because they “didn’t use” that part of the online system.

Here’s a screenshot of the Google Health interface: 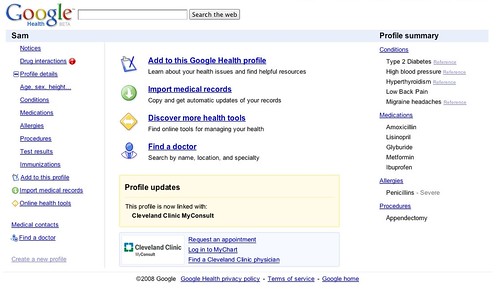 Online health profiles make tremendous sense from a number of points of view and may even be able to save lives in some circumstances by giving doctors access to complete patient health information when they’re not able to (e.g., the emergency room). However, there are myriad privacy/legal issues and larger challenges that have to be resolved, independent of Google or Microsoft, before consumers can fully trust that their records are going to be protected against unauthorized access or abuse.

I spoke briefly with Marissa Mayer this morning and asked her to discuss and address some of the questions and issues I raised above.

On the question of getting third parties (i.e., doctors) to participate with and use the system:

Mayer said that Google Health will be working with doctors, hospitals, pharmacies and others to encourage them to use the system (including uploading existing health records from those third parties). She said that over time she expects more and more doctors, clinics, and hospitals to use the system.

On the question of advertising:

Mayer said that Google will not sell any personal consumer information. She did say, however, that pages that aren’t part of the consumer health profile – information pages in Health that offer general discussions of topics (e.g., diabetes) – would potentially feature ads. This is no different than other ad-supported health sites. But on the question of whether any marketing messages would be tailored to individuals based on their health histories or behavior, Mayer said that was speculative but that under any such scenario, Google would not do so without explicit consumer permission (“opt-in”).

On the question of data security:

Mayer said, “We think we’ve built a system that is resistant to hacking” and brings a level of security and protection that is comparable to what Google provides to sensitive data like email and consumer credit card information (in Checkout). On the question of third parties gaining improper or unauthorized access to consumer health data, Mayer said that Google was bound to comply with local laws but reiterated Google’s commitment to protect the data.