During an investor and financial analyst webcast yesterday Google’s Vic Gundotra said that an “increasingly large” number of advertisers were doing mobile campaigns and that there was a “dramatic amount of interest” in mobile among those not yet advertising in mobile. Much of the webcast was devoted to demonstrating Google mobile products and initiatives and […]

During an investor and financial analyst webcast yesterday Google’s Vic Gundotra said that an “increasingly large” number of advertisers were doing mobile campaigns and that there was a “dramatic amount of interest” in mobile among those not yet advertising in mobile. Much of the webcast was devoted to demonstrating Google mobile products and initiatives and talking about the mobile internet opportunity in general.

Asked repeatedly about CPC rates, search volumes and various percentages of queries and revenues Gundotra declined to offer those specifics but did say that mobile search query growth was “dramatically higher” (from a smaller base) than PC search growth. He added that Google’s mobile traffic growth has been 5X over the past two years: 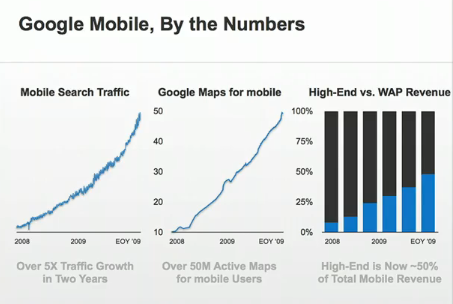 These growth curves make sense given the relative maturity levels of the markets and also the rise of smartphones, which now represent almost 20% of the US handset market and a much larger percentage of new handset sales. Gundotra explained, as he has in the past, that mobile search is largely “additive” to PC search. He pointed out that mobile queries spike when people are away from their desks — during lunch, on the weekends, etc.

An unrelated data slide from Compete illustrates that much of smartphone activity happens during “downtime,” “waiting in lines,” at home or during leisure time. Gundotra also discussed Google’s relatively new Click to Call program and echoed that this delivering “a call for the price of a click.” He offered that there was considerable advertiser interest in the program. During the Q&A session Gundotra was joined by Android VP Mario Queiroz and Google CFO Patrick Pichette. There were questions about the future apps vs. the mobile browser, Android app store growth, the Nexus One, Google’s recent “blue dot” local inventory program, the Japanese market as a model for the West and AdMob, among other areas. There were few specifics revealed and Google wouldn’t discuss AdMob because of the regulatory review going on now. However, Gundotra pointed out that a “surprising  number” of people launch their mobile browser and go to Google.com to search.

What this indicates that Google’s brand equity is very strong in mobile and the company can probably expect continued mobile search leadership notwithstanding competitor “default” search deals that exist or may be brewing. Last month Opera said that Google owned about 68 percent of the search query volume that took place through its mobile browsers (which doesn’t consider the iPhone and most Android devices that see greater percentages of Google search).

One of the soundbites from the webcast that is being widely reported is that mobile ad rates would potentially top PC ad rates at some point in the near-term. While possible and a bit of hopeful thinking, that doesn’t entirely make sense given the current market dynamics.

Google doesn’t have a separate bidding queue for mobile (at least right now) so AdWords on the PC and mobile are the same. In terms of display ads, mobile rates were much higher than on the PC in the past but ad rates have come way down over the past year. This is partly because of ad network competition and the fact that consumers are adopting the mobile web faster than advertisers and there are now many more page views than ad inventory to fill them all. For ad rates to increase there will need to be more advertiser demand and more mobile campaigns, which are coming.

Yet the mobile internet and mobile devices will not simply duplicate the PC experience. There will be overlap and similarity but the mobile internet will evolve and the models will diverge to some degree over time as new advertising, transaction and billing models take hold in mobile.