What has been the impact of Google's new desktop ad layout thus far? Columnist Larry Kim uses data to show who has benefited and who has suffered from the change. Worried about the recent changes to Google’s ad layout on desktop search? Don’t be! I come to you today with a simple message: Keep calm.

Like Kevin Ryan, I’ve been urging people not to panic since this change started rolling out. Plenty of search marketers have overreacted and predicted certain doom, but there is no reason for you to do the same.

With Google, the only constant is change, and we’ve lived through and adapted to huge changes in the past and survived. (Enhanced Campaigns, anyone?)

As always, Google is a zero-sum game. For everyone who wins, someone must lose. In that spirit, I’ve compiled a list of the four biggest winners and losers as a result of Google’s new desktop ad layout so far.

The proof is in the data. I looked at WordStream customer data (thousands of accounts across all industries) and determined that side and bottom ads account for just 14.6 percent of total clicks. As Alistair Dent noted in his post analyzing iProspect UK clients, ads in the top positions get 14X higher click-through rate than the same ad on the same keyword on the right side.

It’s also important to remember that this change only impacts desktop, which now accounts for less than half of all searches. So, really, this will impact 7.3 percent of queries.

But wait. You also must remember that AdWords ads will continue to show at the bottom of the SERPs. So, now we’re talking much less than 7.3 percent of clicks being impacted by the change.

Really, with the addition of the fourth ad spot, and up to three ads appearing below the organic search results, it’s like we just reorganized the naming of ad positions. According to Moz, two-thirds of SERPs still have fewer than four ads above the organic results, so there’s plenty of room to offset those “lost” impressions and clicks.

Also, there are noteworthy incremental benefits for PPC marketers. For example, now all ads can use call-out extensions, sitelink extensions, location extensions and so on, which were previously only a benefit of top-of-page ads. Additionally, the ads appear more “native,” which may prove beneficial for search advertisers, since many searchers already can’t tell the difference between organic and paid results.

And one final way PPC marketers win relates to testing and reporting. This change solves the top versus side ads issue, where sometimes your ads included extensions, and sometimes they didn’t.

Beyond that, I foresee no impact on AdWords auction dynamics (clicks, impressions, CPCs and so on). The changes are nicely balanced. So far, search ads haven’t seen a noticeable change in cost-per-click: 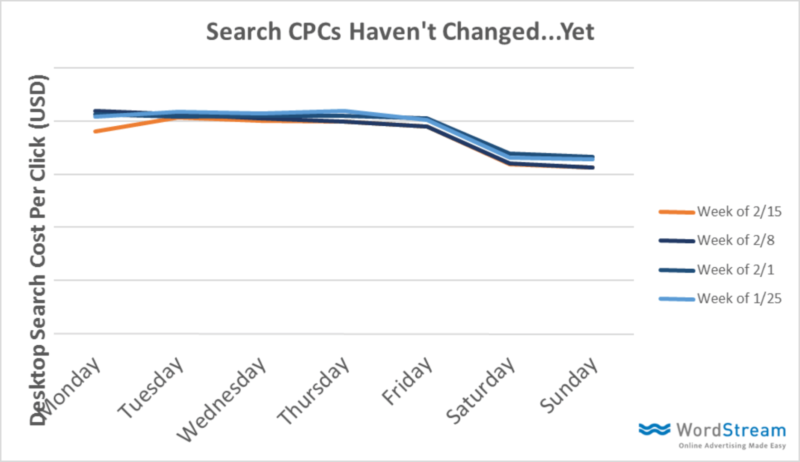 Logically, you’d think the newly created Position 4 would be the biggest winner. But actually, WordStream data showed that Position 3 got the biggest boost, with click-through rates increasing by 15 percent. As Mark Irvine noted in this analysis:

In our data set, position 3’s CTR doubled on Thursday when this changed occurred and the higher CTR has stayed consistent over the weekend.

Mark also found that the removal of text ads from the right side has given a boost to Product Listing Ads (PLAs). Our data showed that PLAs attracted a slightly higher CTR and a larger share of paid clicks from the SERP. Impression share and total share of all paid clicks declined for ads in positions 5 to 11, according to WordStream data.

Ads in positions 8 to 11 got hit the hardest, as you’d expect, since they were all kicked off the new-style SERP. But even ads that appeared in positions 5 through 7 saw less reach: If you do SEO, Google may have you like:

And for good reason. The clear loser with this change is organic search.

Although the number of SERPs featuring a four-ad AdWords block has substantially grown in the past week or so, these SERPs still make up a minority (36.4 percent) of the search results, according to Moz.

Chart from Moz’s “Four Ads on Top: The Wait Is Over“

Still, for SERPs with “highly commercial queries” (e.g., car insurance, mortgage rates, home equity line of credit — the most valuable search queries), the top organic search result will no longer be visible above the fold on many desktop and tablet computers.

Traditional organic real estate has been shrinking for years, thanks to features such as news, images, videos, local/map packs, the Knowledge Graph, featured snippets, new ad formats and features and many more SERP changes.

But really, none of this should be shocking news if you’ve been in the search industry for a couple of years. It’s the same old SEO song and dance.

Okay, so this is a big change. But, as is the case with any other Google announcement, it shouldn’t cause you to panic. We’ll get through it. Together.

I’m reasonably certain that the vast majority of PPC advertisers will come out better than before. It’s possible some might lose, but that’s always been the case with Google changes. Just keep monitoring your campaigns and adjusting your accounts as needed.

So let’s get to work!