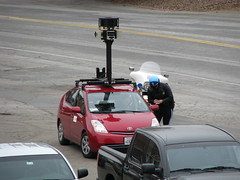 Valleywag reported that the driver of a Google StreetView car was captured on Flickr being ticketed by a police officer. The picture was taken in San Francisco by Damian Spain.

I just can’t stop laughing about the “privacy” violation here. StreetView has come under fire for capturing images that some feel invade privacy. Heck, there’s even an image on Google StreetView of someone getting a traffic ticket. Now someone captures a StreetView car getting ticketed. Wouldn’t it be even funnier if a different StreetView car captured this and placed it on Google Maps?