I said from time to time, I’d highlight some bad search results I come across. Here’s a killer — a top ranking for us national anthem on Google that when you click on it brings up random web sites that have nothing to do with the song. Behind the scenes, there’s an Ask.com connection. Let’s […] I said from time to time, I’d highlight some bad search results I come across. Here’s a killer — a top ranking for us national anthem on Google that when you click on it brings up random web sites that have nothing to do with the song. Behind the scenes, there’s an Ask.com connection. Let’s dive in. 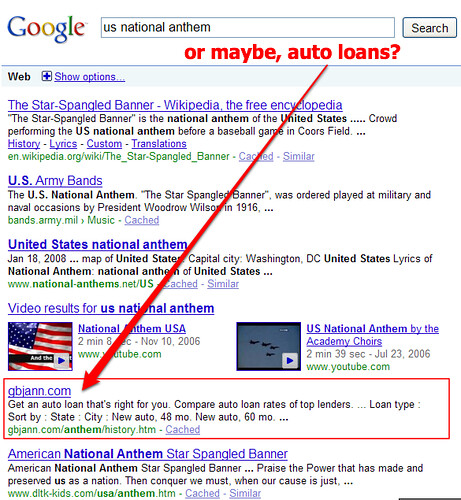 For those who can’t view images, I’m pointing at the fifth listing, which says:

How on earth has Google decided that this page should be among the most relevant for a search on “us national anthem” out of 5 million possible matches? Let’s do some digging.

It appears according to the Internet Archive that until last year, this WAS a page that was about America’s national anthem. It shows a copy of the page from as far back as October 2000 on that topic: 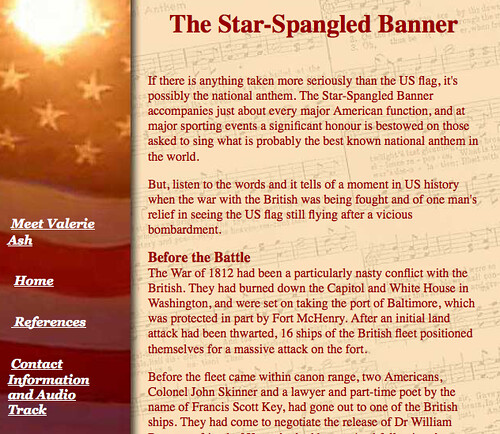 And, as late as July 2008, the page still seems to have looked the same way.

So how do we get from anthems to auto loans? Actually, it’s far more than auto loans that the link leads to. As some point, the page was redirected to a system to basically serve out ads randomly.

Let’s look at the URL that Google lists for the page:

Behind the scenes, requests for that page get a 302 temporary redirect to another page. For the non-technical folks, it’s like your browser is given a new phone number to call, and you’re told this forwarding number is only a “temporary” change. That means Google continues to assume that the “old” page will be back, and all the link data help it to rank for this search term continues to be believed.

Here’s where you get redirected:

When Google followed that redirection, this is the page it saw: 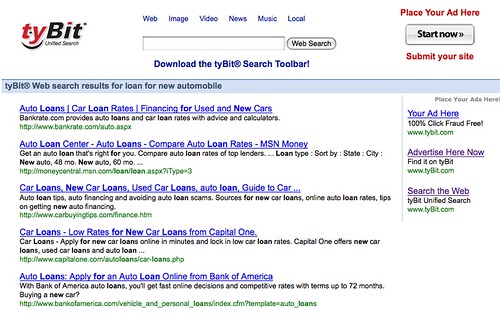 Nice — a page of auto loan listings in response to a search on Google for information about the US national anthem. Oh say can you see the irrelevant results?

Those listings on the tyBit search engine that appears, by the way, are identical to the top results you’ll find on Google for the same search. So tyBit appears to be using Google’s results. Or possibily, it’s getting the results from Ask (I’ll get to that connection in a bit), which in turn may be getting them from Google.

So where’s the money being made? See those auto listings? None of them are paid results. Those ads off to the side? Those are all house ads. No one’s earning much off that page. But then again, a human visitor doesn’t see this page when they click from Google.

Instead, when the page loads, there’s JavaScript that does yet another redirection, which sends you directly to some advertiser’s web site, such as this one: 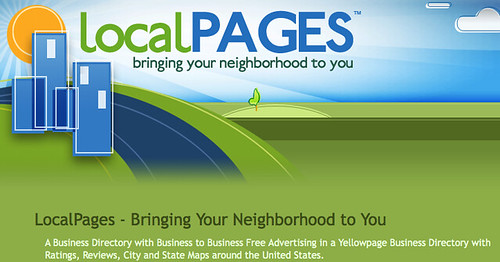 Different ads load each time you click from the listing. I got directed to the Automobile Association Of America once. Another time, I got information about South Carolina lawyers.

Where are these advertisers coming from? We get a clue as we watch the URL change in the browser address bar:

Yes, that’s Ask.com that’s behind this. So piecing things together:

FYI, Ask.com Plays The Google AdWords Arbitrage Game has some background on past irrelevant results that have shown on Google via Ask.com before. Last time, Ask said it was an isolated incident due to a problem with a third-party SEM agency. This time, Ask will probably say the fault is due to a third-party affiliate.

Oh, and that listing on Google? It’ll go poof in the very near future.

Postscript: Ask.com sent me this statement:

On further research, it appears that a third party, acting without our knowledge or consent, was redirecting algorithmic search clicks towards advertisers sourced from multiple ad networks, including ASL. The quality and accuracy of our ad network is something we take seriously. We do have a large number of publisher relationships, and our team is constantly monitoring the quality of the ad inventory.  When we see issues of concern, we correct them quickly.  As you predicted, we identified the source and it was permanently removed from our network over the holiday weekend. In addition, we credited the advertiser accounts that received delivery from this traffic source.