Search Engine Land » Platforms » Google » Google Analytics » The 2012 Santa Tracker Review, From NORAD To Google, From The Web To Apps

The 2012 Santa Tracker Review, From NORAD To Google, From The Web To Apps

It’s Christmas Eve, and Santa Claus is on his annual trip delivering presents to all the good little boys and girls around the world. This year, not just one but two major organizations are offering ways to track Jolly St. Nick on his flight. Below, our annual review of how to track him by the […] It’s Christmas Eve, and Santa Claus is on his annual trip delivering presents to all the good little boys and girls around the world. This year, not just one but two major organizations are offering ways to track Jolly St. Nick on his flight. Below, our annual review of how to track him by the web, by app or even through a telephone call.

You can find the two major Santa tracking sites this year here:

Below, more about using both of the sites, including related apps or even an email-for-location feature that NORAD offers.

In the first corner, we have NORAD — the joint US-Canadian missile-tracking organization that has also been watching for Santa since 1955, after a mistaken phone number was placed in a newspaper ad, inviting children to call for Santa’s whereabouts. NORAD took up the challenge and has been doing it for nearly 60 years now.

In the second corner, we have Google. The search engine giant had partnered with NORAD on Santa tracking since 2007, but this year, the two parted ways. NORAD partnered with Microsoft and its Google-rival search engine, Bing. Meanwhile, Google launched its own Santa Tracker for the first time.

Both are currently live now, simultaneously tracking Santa, as the screenshot shows above. Taken at exactly the same moment, it shows Santa in two different locations at the same time!

How’s that possible? NORAD explains that it uses everything from radar to jets to track Santa. Google doesn’t explain its technology, but I suspect it tries to triangulate Santa using his cell phone signal or use of wifi hotspots.

As for why NORAD shows Father Christmas delivering three-times the number of gifts that Google is listing, perhaps NORAD’s radars can better pinpoint presents while Google might be doing estimating. Meanwhile  both services sometimes show presents being delivered over oceans! And why is NORAD showing Santa arriving in some places at 9pm rather than midnight, as has been the case in the past?

If you really want to get into detailed explanations for some of this, see our separate story at Marketing Land: Santa Tracking Explained: Why NORAD & Google Show Different Locations & Gifts Delivered.

When you go to both of the sites above, by default, you’ll see the location of St. Nicholas on a map. I like the NORAD map better than Google’s, because Santa’s location on the map is constantly moving, with a topographical view of the area he’s flying over displayed: Sure, Google’s icon for Santa also moves, but much more slowly. There’s no sense of FAST! And the maps don’t have a topographical look: 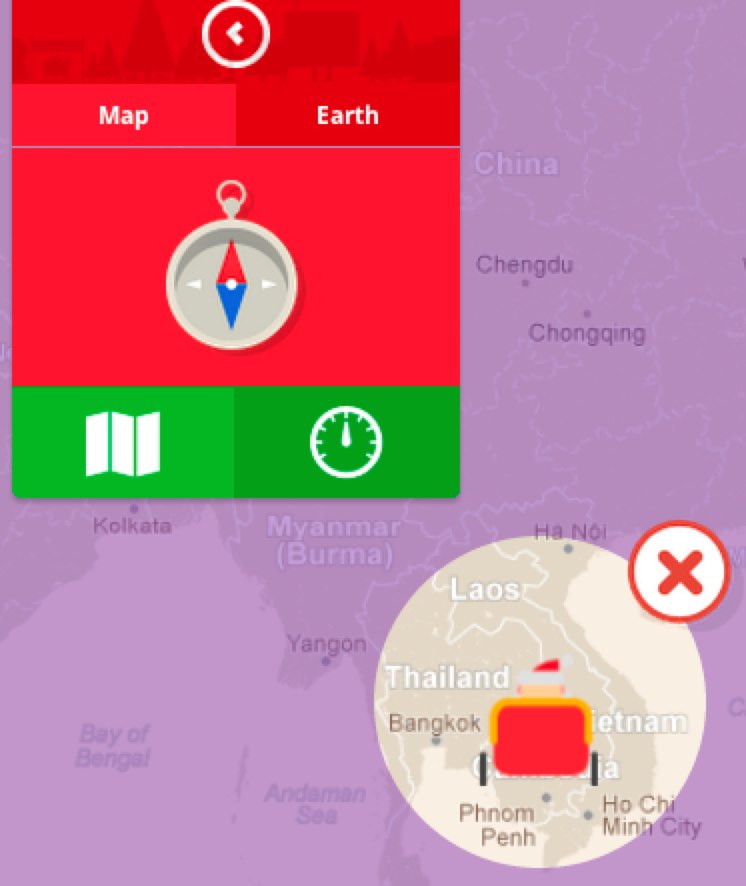 Each map also says where Santa was last spotted by the particular service, where he’s estimated to be headed toward and arrival time, along with number of estimated gifts delivered. Google also reports total distance traveled and the status of Santa’s attitude (“Mmmm, those cookies were delicious!).

Google does have a 3D view similar to the one that NORAD shows by default. You just have to enable it by clicking on the “Earth” link above the compass in the map. If you do that, you’ll give a much more animated view similar to NORAD’s, seen through what looks very much like a Google Nexus 10 tablet: Seeing Where Santa Has Been

By the way, when you’re in Google’s default 2D view, if you click on the little X on the circle around Santa, you’ll see all the places he’s been spotted: When you click on the icon for a particular place, you’ll learn when he arrived and have access to Wikipedia information and general pictures of the location: NORAD also shows past locations. To see this, click on the 2D button within the map. That will change it over for you, and you’ll see Santa’s current location plus all the places that he’s been: If you click on any of the presents, you’ll get information from Wikipedia about the place St. Nick has visited. If you click on one of the green circles, you’ll see Santa Cam footage of his flyover. That leads to…

Video Of Santa In Flight Oddly, only the last three videos are listed. Annoyingly, the NORAD Tracks Santa YouTube page doesn’t list any at all. They’ve been hidden there, and so far, NORAD doesn’t appear to be unhiding those that are published.

So, if you need to check for video from a particular area, go to the 2D map view and look for those aforementioned green circles. Do watch the videos. They’re cool. Here’s one showing Santa Claus flying over China and the Great Wall:

As we’re constantly on the move, it can be useful to also track Santa when we’re away from our computers. Both sites make this possible, though it’s hard to location these options on the NORAD site.

Before Christmas Eve, NORAD’s app tracking options were easily spotted at the bottom the main page: 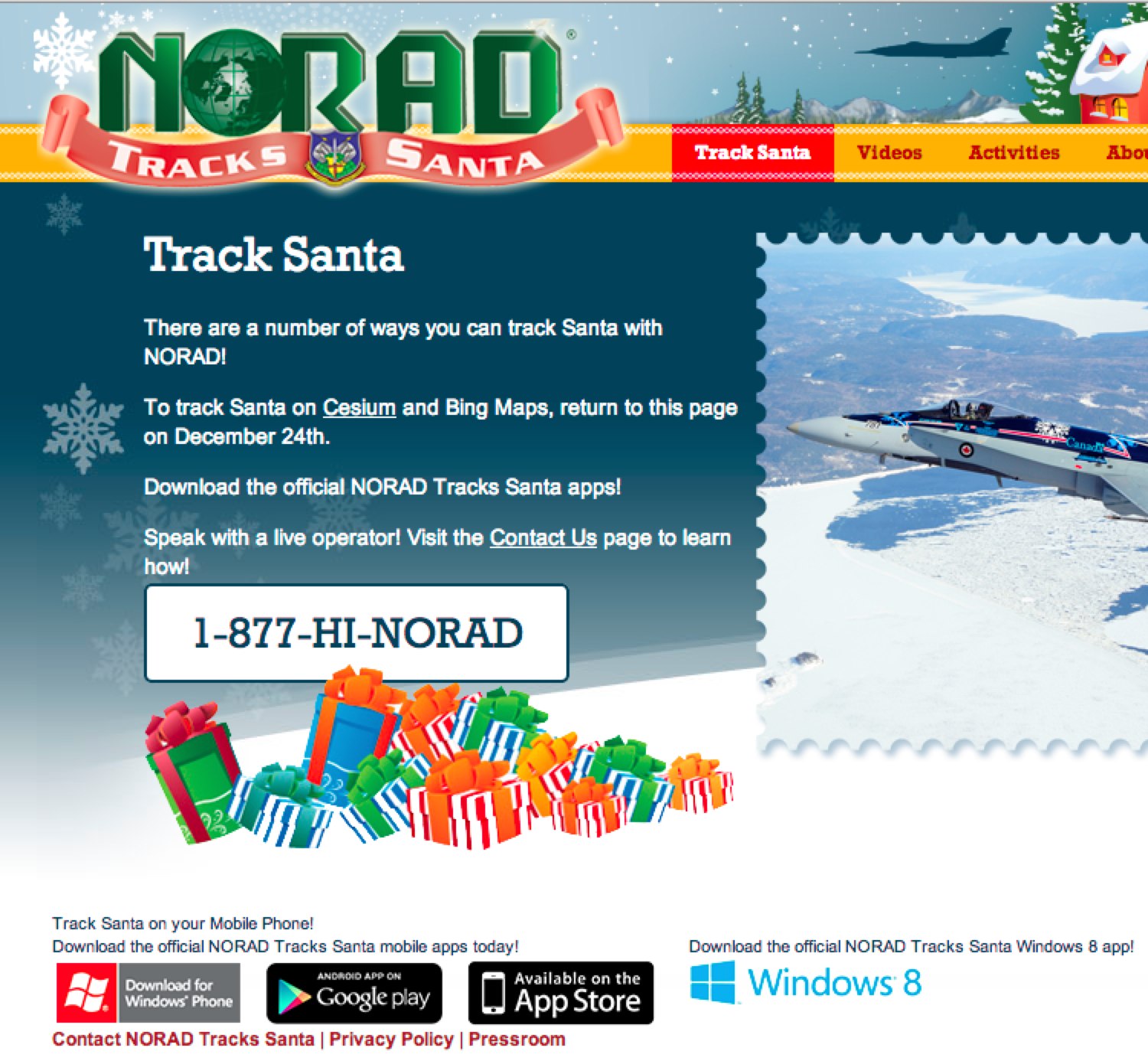 I fear something has gone wrong with the site, because none of those links now show (and Microsoft is losing some of that brand promotion is presumably paid for). But the apps do work, so here are the links again:

Here’s how the Windows 8, iPhone and Android apps look side-by-side: I like the little snowglobe that’s unique to the Windows 8 app. The iPhone and Android apps have the same opening screen and both offer at least one game. The iPhone app plots Santa’s location on Apple Maps (using NORAD’s data, not Apple’s, so relax), while the Android app plots on Google Maps. All the apps show Santa’s current location and let you see past visits.

As for the Windows 8 app, it looks nice on the splash screen, and you do get the location of Santa:

But drilling into the maps, no video icons appear. The presents for past locations don’t reveal new information. The Videos area in the app doesn’t list any of the Santa Cam videos. You’re probably better going off to the actual web site than using the app.

Meanwhile, Google also has an app for its Santa tracker, though link to it from the web site is hard to find. And sorry  iPhone and Windows Phone users, only Android is supported. There’s also a Chrome app. Here are the links:

Here’s a look at the Android app and the Chrome app side-by-side: Both NORAD and Google are offering ways to keep up with Santa’s location through social media. From NORAD:

Here’s an example of a tweeted update: And from Google, tracking is provided through Google Maps accounts:

Here’s an example on Google+: Want to go old-school tech with Santa tracking? How about email? Send a message to [email protected], and you’ll get an update that way, like this one I received:

Finally, my favorite feature of all the Santa tracking services is that you can actually call NORAD and have a human being give you an update.

The number is 1-877-HI-NORAD (1-877-446-6723). You’ll likely get a recorded update at first, as the lines get busy, but within a short time (I only waited a minute), a you’ll get an update, usually a military volunteer spending their Christmas Eve in a different type of service, that of helping kids around the world continue to believe.