Why Enhanced Campaigns Aren’t Really An Upgrade Or Improvement

I am absolutely fascinated by the automotive industry and am admittedly a car guy. The newest cars continually impress me because every new model seems like a significant upgrade over the previous model. And, they really are. New cars are lighter, stronger, more spacious, safer, more fuel efficient, and quicker than ever. A 2013 Mazda […]

I am absolutely fascinated by the automotive industry and am admittedly a car guy. The newest cars continually impress me because every new model seems like a significant upgrade over the previous model. And, they really are.

New cars are lighter, stronger, more spacious, safer, more fuel efficient, and quicker than ever. A 2013 Mazda hatchback that costs a mere $30,000 is quicker than the (then) $180,000 Supercars from Italy I grew up idolizing. Astonishing, really. The term “upgrade” often seems like an understatement.

So, what happens if the new models are not better? Thankfully, we need not speculate because the American automotive industry managed to spend over a decade rolling out one terrible car after another. Very few were competitive and some were worse than the models they replaced. They all nearly closed shop. It was a tough few years in Michigan.

It is safe to say that failing to improve your product is bad for business, right? Right.

Google AdWords releases new versions of their interface on occasion. They even sometimes call them enhanced! We decided that “enhanced” means upgraded or better, correct?

After watching the Detroit automakers nearly collapse, no savvy company would roll out product enhancements that were inherently worse… right? That would, of course, be absolutely crazy.

Most advertisers who have dabbled in device targeting effectively, genuinely believe that it is an invaluable addition to the AdWords interface. So, how is removing that useful feature a step in the right direction? Or an improvement?

Google essentially declared that the conversion rates between desktop and tablet users were so comparable that there was no point to keeping the campaigns separate.

Is that so? I decided to check data I had gathered from some previous clients on the differences between device conversion rates.

Of course that was a small sample size and an anecdotal story at best, but I have yet to hear from anyone who has utilized device targeting effectively and can corroborate the search giant’s claim regarding tablet and desktop browsing behavior.

Google is replacing device targeting with the ability to modify bids specifically for mobile devices, but only at the campaign level. That feels a lot like giving a Band-Aid to a heart surgeon and wishing the patient a successful triple bypass.

What are we going to do with bid modifiers at the campaign level when actual bids are calculated at the keyword level? Workarounds? Tricks and tips to get back what we currently have? Ugh.

AdWords stressed that the enhancements were geared toward improving the experience for local searches. I certainly understand how Google wants to enhance the search results for a florist and prioritize the closest options as the most important. Because why am I going to want to drive an hour to buy regular red roses when I could drive 10 minutes instead? I am on board with that.

These might be the types of advertisers who could benefit from Enhanced Campaigns. But there are two big things to consider:

While I have no data to answer that question, I can’t imagine the answer being yes to either question. If those advertisers have only a small impact on Google’s bottom line, why is Google dictating new terms of service to all advertisers (especially enterprises with large aggregate spend) based on the needs of seemingly a small ratio?

If Enhanced Campaigns are better for local businesses, why not allow advertisers that feel the new campaigns are a better fit for their business the ability to opt in or out?

That way, those of us who have been drinking the device targeting Kool-Aid can be happy we still have the settings to which we have grown accustomed. Oh yeah!

ZAGG Is The Poster Child For Device Targeting

While every PPC account is different, very few advertisers will miss device targeting more than me. We sell accessories for the very gadgets in question: iPhones, Android devices, iPads, etc.

The ability to target by device is crucial, and the measured success that we have seen is the proof. In the 365-day period after implementing device specific campaigns, ZAGG saw huge year-over-year improvements:

This should shock no one, but I’ll just point out the obvious: ads targeted directly to users, while they were on their iPads, pitching iPad accessories were successful! Isn’t that what you’d expect to happen? Nevertheless, we wrote fun ads like these and iPad users responded very positively. 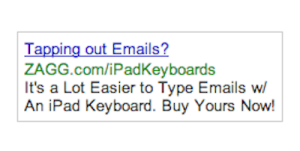 We weren’t alone. Many e-commerce sites find that iPad users convert at a higher rate. Other online advertisers tailor banner ads and messaging to iPad users and consistently see improved click-through and conversion rates. Not only do iPad users convert better but they also spend more with higher AOVs, according to this article.

Wait just a moment! Didn’t Google say that ads on tablets perform comparably to ads on desktops? I think we’re all starting to have a doubt or two in regard to what AdWords said on that matter. Even if that were the case, they conveniently failed to mention how mobile conversion rates fare against desktops/tablets. They’re worse. But, they’re still going to be lumped together with desktops and tablets.

Finally, instead of giving advertisers full transparency to attempt to optimize our mobile campaigns, we get campaign-level bid modification. If our keyword lists could slap us in the face, this is what it would feel like.

What can we expect? Some advertisers might welcome Enhanced Campaigns with outstretched arms. It is entirely possible that these advertisers will see continued success using the new campaigns. That’s fantastic for them!

Search marketers who have noted varying conversion rates across devices and taken steps to reduce or eliminate unprofitable traffic sources are likely worried. At this point, it is for good reason.

Google plans on taking away features we rely on without replacing them with enhanced or upgraded ones. It’s not like that one time when AdWords decided to move the Search Query Report from the “Reports” tab into the keywords tab, where it still resides. I don’t think anyone questioned that the SQR change was better because they took an existing report, improved it (you may even say it was enhanced. Imagine that!), relocated it to a more useful access point, included better data, and we only complained because they relocated it. Once we realized it was truly improved in nearly every way, no one could be bothered to care about the relocation. Apparently, those were the good ‘ole days.

This time around, we care because it is not clear that any of these changes outlined in Enhanced Campaigns even improve the outlook for any (much less the majority of) advertisers.

We review our conversion rates from before we enabled device targeting, look at how much they have improved as a result, and then we imagine explaining to our clients or managers why costs have increased.

Pointing out that Google unceremoniously took away valuable data that we use daily for optimization sounds unbelievable even as I type it now. Why would Google do such a thing? Less informed clients and decision makers could lay blame on their search marketers. This is why the PPC community is nervous.

What’s Next For Advertisers?

The announcement is still hot off the dot matrix press and AdWords has promised a slow rollout, which means for right now there’s only one thing we can do: let Google know that we don’t want our AdWords features taken away.

Similar to the petition created nearly a year ago protesting the change to the Ad Rotation policy, the PPC community is already moving ahead with another petition regarding the Enhanced Campaigns.

The Ad Rotation petition was a huge success and pivotal factor in exacting the change we wanted: AdWords returned to us the option to rotate our ads until the end of time, if we so choose. A year later, we want Google to know that we want the exact same thing (what a surprise!): the ability to opt in or out of the Enhanced Campaigns.

You can find the petition here. It takes less than 30 seconds.

Neil Sorenson
Neil Sorenson is the Head of Pay per Click at ZAGG.com, and his daily duties include paid search, retargeting, product feed management, media buying, and ping pong domination.