Search Engine Land » Channel » SEO » Yahoo Celebrates Its 13th Birthday; Will There Be A 14th?

Yahoo Celebrates Its 13th Birthday; Will There Be A 14th?

As Yahoo celebrates its 13th birthday, the looming question is: will the company be able to find an alternative to the Microsoft offer, or will Steve Ballmer & Co. prevail? According to the Wall Street Journal, Yahoo has recently “stepped up” talks with AOL about potentially folding AOL’s business into Yahoo. The scenario under discussion […] 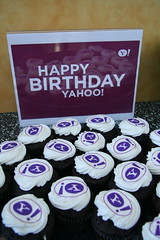 As Yahoo celebrates its 13th birthday, the looming question is: will the company be able to find an alternative to the Microsoft offer, or will Steve Ballmer & Co. prevail? According to the Wall Street Journal, Yahoo has recently “stepped up” talks with AOL about potentially folding AOL’s business into Yahoo.

The scenario under discussion would involve folding AOL into Yahoo with Time Warner taking a sizable minority stake in the combined entity, say the people familiar with the matter.

They say that Yahoo and Time Warner had an earlier round of discussions, but talks intensified recently after Yahoo went back to Time Warner to ask for a proposal that it could take to Yahoo directors. Time Warner is putting the finishing touches on that proposal now. The people familiar with the matter say that the companies estimate about $1 billion in cost savings annually.

The discussions, which have included contact between Time Warner Chief Executive Jeffrey Bewkes and Yahoo CEO Jerry Yang, are driven at least partly by the idea that uniting Yahoo and AOL, including its Advertising.com business, would create an online advertising powerhouse.

The WSJ says that outsourcing Yahoo search to Google is not currently part of the discussion.

March 14 was the deadline for Microsoft to offer an alternative slate of potential Yahoo directors as part of its intended proxy fight. That deadline has just been extended to “10 days following the public announcement of the date for Yahoo!’s 2008 annual meeting of stockholders.” However, that meeting date has not been set. See the SEC filings on the change here.

In a letter to employees, Yahoo CEO Jerry Yang explained that the move is designed to give Yahoo more time to explore options:

in light of the current circumstances, this change removes an imminent deadline. microsoft, of course, could still choose to name directors, but our objective here is to enable our board to continue to explore all of its strategic alternatives for maximizing value for stockholders without the distraction of a proxy contest. it will also make it easier for you to continue to focus intently on delivering on our business strategies and creating value.

Unless or until a concrete alternative for Yahoo emerges, the most likely scenario is still a Microsoft takeover. Many in the press and technology community have assumed that Microsoft will prevail and speculated about the integration challenges that would likely follow. However, at least one analyst sees a smoother transition than widely anticipated, based on Oracle’s experience following its hostile takeover of PeopleSoft:

[Analyst Donovan Gow of American Technology Research] points out that Yahoo is only 12% of Microsoft’s size in terms of revenue and 14% in terms of headcount. PeopleSoft, by contrast, represented 23% of Oracle’s revenue and 29% of the software giant’s headcount.

“Oracle’s proposed acquisition was met with similar skepticism with Oracle’s stock falling over 10% initially and then climbing more than 90% over the next three years as integration fears were put to rest, a pattern we believe we will likely see again with Microsoft,” Gow wrote.

Much like the US Democratic presidential nomination race, many people are starting to yearn for a resolution to the Microsoft-Yahoo drama, which has proven to be a major distraction to Yahoo employees. Given that Yahoo management appears to be trying to buy itself more time, it appears everyone will need to wait a bit longer.