For over a year, Microsoft has been experimenting with games to help build its search marketshare. Yesterday, I learned of one that certainly caught my eye: Indiana Jones Search. Designed for those in the UK, you perform a search: Then at the top of the search results page, two stones turn, with you hoping they’ll […] 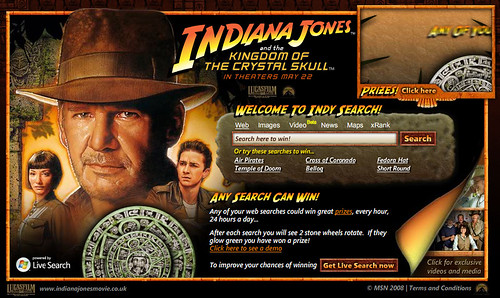 For over a year, Microsoft has been experimenting with games to help build its search marketshare. Yesterday, I learned of one that certainly caught my eye: Indiana Jones Search.

Designed for those in the UK, you perform a search: 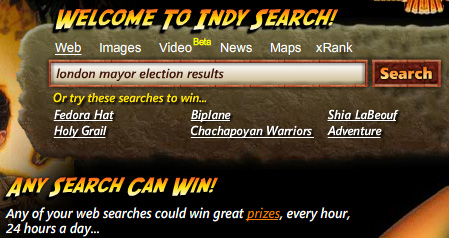 Then at the top of the search results page, two stones turn, with you hoping they’ll turn green:

Then you get your results. I lost: 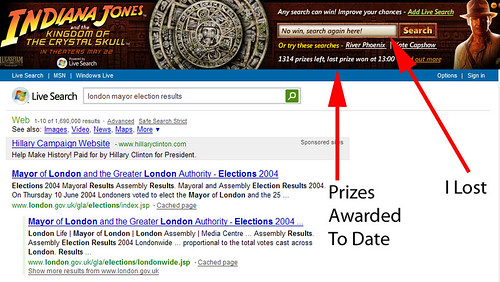 You also get shown how many people have won prizes that range from a trip to the New Mexico film location, to an Indiana Jones hat, whip, DVDs, and more.

If you don’t live in the UK or Ireland, you can’t win. Sorry. But you can still have fun playing with one of the latest ways Microsoft is trying to build traffic.

I’m going to take a longer look at the games activity Microsoft has been doing in a future post. Until then, check out Microsoft On Search Gains & Live Search Club, which I wrote last year and covers some of Microsoft’s goals, plus some controversy that has come up in the past over whether game-driven searches should be counted.

Ratings service Compete, in particular, seems to have been filtering these queries out. Last month’s Microsoft Dips In Compete’s Revised March 08 Search Figures shows what happens if you don’t.

At a Microsoft event I attended yesterday, I talked briefly with Microsoft Live Search general manager Brad Goldberg about how the games are going. One big takeaway was that he said they are indeed helping create regular users for Live Search.

Games and giveaways have worked in the past to help build share, at least in the short term. iWon did this in 1999 and last year did a revamp to try again.

As for Microsoft, we’ve covered these launches over the past year:

In the US, Microsoft Live Search Club continues to be the place where Microsoft offers search-related gaming ranging from Chicktionary (where you try to arrange letters to unveil a word, with search being used to offer hints) to Spelling Bee. You can even use Search and Give to donate to charities based on searching.

In the UK, it’s Gamesbox that serves as the home to search-based games, such as Search Star to the new Indiana Jones one (which isn’t yet listed on Gamesbox, but it replaces Big Snap that is listed).

Google would never do this, of course. Yeah, Google’s done it at least twice, far less organized than Microsoft, and around movies. The Ultimate Search For Bourne was a tie-in with The Bourne Ultimatum that Google ran last year. In 2006, it did a similar gaming site with the Da Vinci Code.