During its “next dimension” event this morning Google sought to convey to an audience of tech journalists and others how much effort, expense and care it has invested in Google Maps. Indeed, the platform is roughly eight years old and has seen enormous growth and evolution. The rumored and much discussed potential launch of an […]

During its “next dimension” event this morning Google sought to convey to an audience of tech journalists and others how much effort, expense and care it has invested in Google Maps. Indeed, the platform is roughly eight years old and has seen enormous growth and evolution.

The rumored and much discussed potential launch of an Apple mapping product was the “elephant in the room” though competitors were never mentioned by name. The following is my live blog of the press event.

It begins with a video showcasing all the uses of Google Maps. Brian McClendon is on stage introducing the event. He’s giving us a brief history of rich and dynamic mapping on the web and at Google. He doesn’t mention Mapquest as the pioneer. 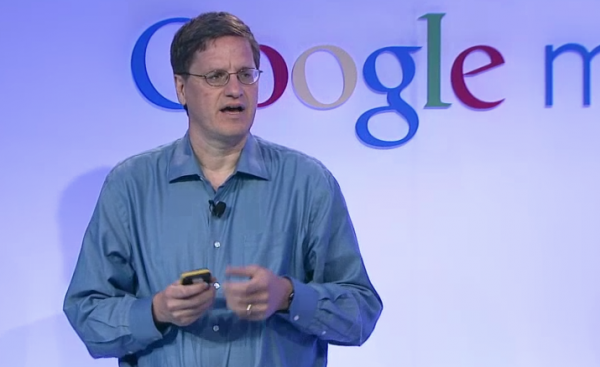 McClendon came from Keyhole, which was the acquisition that provided the basis of Google Earth and some of the advanced mapping capabilities that were incorporated into Google Maps. He said that Keyhole sold to Google for “resources and scale.” “The ability to reach so many users was something that only Google could give us,” said McClendon.

He says that before Google Maps in the early 2000’s online mapping was slow and awkward. He’s now discussing the early, technical innovations behind Google Maps: pre-rendering map ties offline, single search box and AJAX among other things.

Today 75% of all the people in world can see their homes in high-res imagery on Google Maps.

McClendon is talking about Street View; he says they’ve now driven over 5 million “unique miles.” He’s now talking about base maps, MapMaker and map data being built and collected “from the ground up.”

All the stats and historical discussion are conveying how ambitious Google Maps is at every level (read: others/Apple can’t easily duplicate what we’ve done). McClendon talks about the comprehensiveness of Google Maps and Earth: 187 countries covered; 29 countries with turn by turn, voice-guided directions.

McClendon laid out the various ways in which Google ensures the accuracy of local data. The company’s approach involves both top-down and ground up methodologies (including user corrections). As an aside, many local SEOs gripe about challenges surrounding correction of the local data and potential for competitor/user fraud.

McClendon says that the user-experience on Google Maps is superior and ticks off the reasons why, including the single search box. Now he’s talking about indoor maps and navigation and the value it brings to users. He adds that Google wants to bring all the world’s maps to users around the world in their language. Google’s working on it.

Google Maps API is used by “over 800,000 developers.”  (Though some are balking at fees recently imposed on high volume users.)

Next up: Rebecca Moore, head of Google Earth Outreach to discuss the progressive and socially beneficially uses of Google Maps.

She’s discussing Hurricane Katrina and how it showed Google that Maps/Earth could be a tool for “public benefit.” Google Earth Outreach came out of Katrina. “Our map  . . . is the world’s map.” People want to put their stories on Google Maps, she says. “Maps are an expression of culture.”

Moore is announcing that the Halo Trust is using Google Earth to track landmine clearance operations around the world and marking areas for clearance and areas that are now cleared and safe. (This is a great use of Google Maps indeed.) Google Maps can “unite peoples and nations toward a common good,” ends Moore. McClendon is back to show new demos.

Google Maps is going offline and coming soon to Google Maps for Android. You’ll no longer need a connection on your phone to use GMM for Android. Rita Chen is up to demo the offline feature. This is a potentially killer feature.

You’ll be able to download any map onto Android. GPS will still work with offline Maps, even though there’s no data connection. “The experience is truly better than paper.” She’s demo-ing the feature on a Motorola tablet. Now up is Luke Vincent of Street View. Street View was his 20 percent project. “I’m very pleased we have taken it so far,” he says. But the original of Street View comes from Larry Page. Vincent explains how Page drove around Palo Alto taking video and then gave it to a project at Stanford (which Google later acquired as a pre-launch startup). He’s showing an image of an early Street View van. He characterizes it as a “monster.” He then shows a Street View car from today. Google has put these cameras on boats, trikes, snowmobiles and now push carts for indoor photography. He also shows another wearable rig for outdoor walking use cases. It’s “under 40 lbs.” Google is going to take it to national parks and similar inaccessible places. He even wore it skiing. Another speaker is up (Google product manager Peter Birch). He’s going to talk about 3D mapping today and into the future. He says in 2005 3D images were introduced on Google Earth. In 2006 3D photorealism was introduced.

He’s critiquing Google 3D rendering and its limitations. He says Google’s goal is “modeling the world in 3D.”  Google is using automating 3D rendering and has been, but now the quality has improved dramatically. Google (like Microsoft) is using planes to photograph metropolitan areas for automated rendering. (The status of Microsoft’s 3D rendering efforts is unclear now given its relationship with Nokia and its integration of Navteq mapping data.)

We’re now getting a technical explanation of how Google does 3D modeling and rendering. (Again the message here is: there’s lots of effort, technical expertise and money behind Google’s mapping efforts — this can’t be easily duplicated. The company is trying to educate journalists who’ll probably be writing about Apple Maps next week.) “We’re trying to create magic here.”

Tablet (not an iPad) demo time again. The imagery is impressive; everything is modeled in 3D not just a few buildings. “This is just a sneak peak of technology that we have available.” This 3D imagery is coming to Android — and iOS — devices in the coming weeks and months.

A Billion Users of Google Maps

Brian McClendon is back on stage. He says there are 1 billion of monthly active users of Google Maps. “While we’ll never create the perfect map, we’ll get much much closer than we are today.”

That’s the end of the webcast. The stream goes dark for Q&A. I’m sure there will be questions about Apple and Google’s relationship and the rumors about Apple Maps/iMaps. Unfortunately I’m not there to hear the answers.

In all Google demonstrated the depth and comprehensiveness of the platform. Aside from offline maps — which is a great feature — there were no major announcements. The repeated subtext was no one else has devoted the resources to mapping that Google has and no one has (or will have) a product as complete as Google Maps.

Postscript: I had suspected this but it was pointed out to me in an email that Nokia Maps have had offline capability “for years.” Nokia Maps also have 3D (in some cases). Interestingly the previous provider of 3D mapping to Nokia was Sweden-based C3, which was acquired last year by Apple.