Make no mistake. I think real time search is indeed one of the most exciting developments that’s happened in the search space in years. But I also think search engines are acting a bit like cats getting a sniff of catnip. They’re high on real time search and acting kind of crazy. This week, Google […]

Make no mistake. I think real time search is indeed one of the most exciting developments that’s happened in the search space in years. But I also think search engines are acting a bit like cats getting a sniff of catnip. They’re high on real time search and acting kind of crazy.

This week, Google rolled out real time search integrated into its main results. It’s a dynamic, scrolling display of the latest tweets and other content that matches what you’re searching for.

Google search results that are scrolling? Think about that. Four years ago, Google quite famously said there would be no “crazy, flashy, graphical doodads flying and popping up all over the Google site. Ever.” I don’t know about you, but a dynamic scrolling box of results is pretty flashy and graphical to me.

More dramatic, Google is effectively going back to the old days of 1997, when Infoseek had an “instant add” feature that allowed anyone to add their pages to its search index within seconds. That was dropped, because it opened the door to search spam. People would just rewrite their pages until they got a top ranking.

Fast-forward 12 years to today, and if I want a top ranking on Google for Copenhagen, it’s easy. I just tweet something about it and moments later, I’m there for a search on copenhagen:

This is transitory, of course. I’m only going to be there for a few seconds. But spammers are smart. They’re happy to set up robotic accounts that do nothing but tweet all day. And Google’s smart, and can spot abuses like this. But Google’s not perfect, and spam will get through, and it’s an entire new cat-and-mouse game it’s playing.

For more on the spam potential, I highly recommend checking out Google Enables Real Time Spam and More from Outspoken Media and The anatomy of a deceptive Tweet spamming Google Real-Time Search from Sebastian’s Pamphlets.

Why would Google expose itself to a new front in the spam wars like this? Is real time search THAT compelling? Sometimes, sure. When doing a search on Obama, it was interesting and compelling to see some reactions from those listening:

I didn’t have to go out of my way for these “person on the street” views. They were part of my overall search experience, and useful.

But then again, I didn’t need them scrolling. Google could have easily done a “snapshot” and shown me some static examples, with a link to get more. Perhaps it might also show me what it determines to be the most authoritative or most retweeted comments.

Scrolling isn’t necessary. It’s not like with the longstanding news results OneBox that shows that it scrolls. Yet some of that same content is now in the real time area where, by virtual of being sprinkled with real time pixie dust, scrolling is deemed important.

Speaking of news, it gets mixed into the real time results — and that’s darn confusing. Here’s what I saw when I searched for obama nobel peace prize on Google: 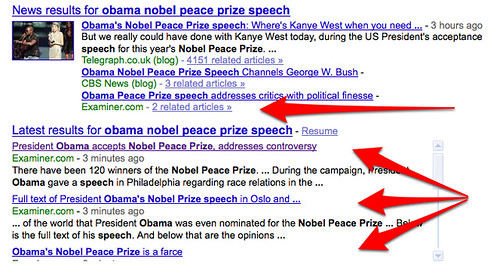 I get news results, then underneath that, I pretty much got news results again — only with scrolling. The first arrow points to a story from Examiner.com, which was just featured in Time Magazine yesterday about how it has super powers to do whatever it wants within Google News. Apparently these extend to real time search, because I got three stories in a row from the publication, as the next arrows point at.

Of course, these stories weren’t each written within seconds of each other. The probably weren’t even published within seconds of each other. Google either just found them all at once or perhaps got pinged (and maybe repinged) that they were all published. But that’s the farce of mixing in things that aren’t microblogged content into real time results.

In other instances, it’s hard to see how giving up so much of Google’s most important search real estate is enhancing my experience. On the trending topic of e-bay, according to Google, I got:

The latest eBay items for sale, as tweeted. I guess that’s good. But why not take a feed from eBay?

To its credit, I watched for outright spam in a variety of ways for about 20 minutes and didn’t see any. For example, consider this tweet on Tiger Woods from Twittter Search:

That never made it into Google. But nevertheless, stuff will get through. Yesterday, Google was listing “woods tiger” as a trending topic, so I checked it out: 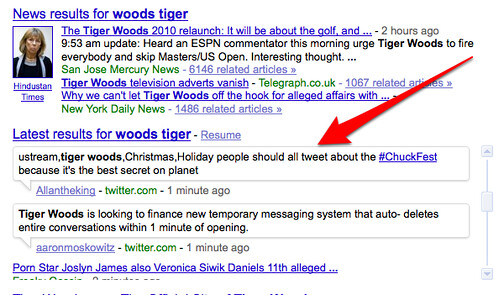 Whatever #chuckfest is, it was hoping to cash in on a variety of trending topics (Ustream, Tiger Woods, Christmas) by listing them along with its own hashtag.

If Your Friends All Jumped Off A Real Time Cliff…

Meanwhile over at Facebook, it’s doing extremely disturbing things with privacy settings that all seem in hopes of getting more people to effectively tweet out of Facebook itself. Facebook wants an update stream that rivals what Twitter has. Because? Because I guess Twitter’s got all this attention over its update stream, so Facebook better get its own going lest it misses out.

It doesn’t seem to matter that Twitter’s not yet making much money off its service. Facebook is willing to dive in and risk seriously upsetting existing users with privacy changes to chase the Twitter-rainbow.

Meanwhile, MySpace rolls out an API to better release its updates, all of which sounds as if it’s screaming, “Hey, we’ve got updates too!” And Google’s cut a deal to carry those, though it won’t say if it’s paying for that deal or not.

Trust me, I know. I asked Google on Monday three times, in three different ways, if they were paying for data from MySpace, Facebook or Twitter. Nada. They won’t say. Which leads to the craziest part of all this.

We’ll Pay For Chatter, But Not For News

Google is steadfast that it does not want to pay for news content. Sorry, Rupert Murdoch (who also MySpace), we don’t think we should pay to link to your news stories. And yet, Google does appear to be paying Twitter for its data.

The New York Times quoted Twitter CEO Evan Williams as saying there’s a financial component to the Google deal, though that wasn’t the “focus” of it. Twitter COO Dick Costolo confirmed the same at a TechCrunch event recently.

Facebook is less certain. The Daily Telegraph reported that Facebook COO Sheryl Sandberg saying that Facebook wasn’t making any money from its deal with Bing. Maybe the same is true for Google. Maybe not.

It sure is a weird strange world where it’s deemed crucial to do deals over what people are saying about news rather than the news itself. I also feel a little pimped, like what I do on Twitter, Facebook and MySpace has become their property to sell and trade. I know — I use these services freely, and I can lock things down if I want. Still, it feels odd in some way.

It also just feels weird that there’s so much effort to do something, anything with real time in terms of search rather than the right thing. Throw something on the wall now! See if it sticks.

Of course, I don’t know what the right thing is. We do need experimentation. We do need to have things thrown on the way. And I DO think real time results in some way belong in the main search results, as well as dedicated tools. Plus, I do believe that there’s a business model in Twitter, that microblogging is an important new communications channel.

Still, I also can’t help feeling the search players are all a little tipsy off that real time catnip.