So finally, we’ve got Google Real Time search, as the company has announced. Below, I’m doing a quick hit on what’s it is, how to use it and how it compares to that last Google real time search thing you may recall hearing about. How do you get it? It’s rolling out over the next […]

So finally, we’ve got Google Real Time search, as the company has announced. Below, I’m doing a quick hit on what’s it is, how to use it and how it compares to that last Google real time search thing you may recall hearing about.

How do you get it? It’s rolling out over the next few days, and when you have it, you’ll see it just happening withing your search results. But if you can’t see it, try clicking on this link which may force it to appear for you.

For example, below is a search for health care on Google where about midway down on the page, there’s a “Latest results” section that appears with real time results: 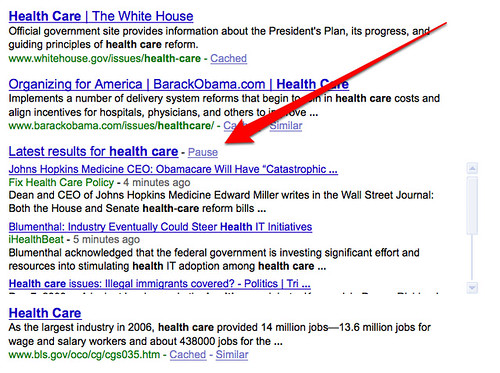 The results automatically flow with new information — and if that’s annoying, you can use the “Pause” link at the top of the section to stop them. What you can’t do is remove the section entirely, if you don’t like it.

By the way, you won’t always see the results. “If high quality information is coming in, then we will show it,” said Amit Singhal, a Google fellow who heads Google’s ranking systems and oversaw the development of the new real time search system, when I talked with him after the Google press conference.

In other words, if Google thinks something has some real-time component to it, then it will show the section. In particular, if Google sees a spike in information on a certain topic, along with queries on a particular topic, then it assumes there’s a real time situation happening — very simplified!

Click on the Latest results link, and you can drill down into the results: 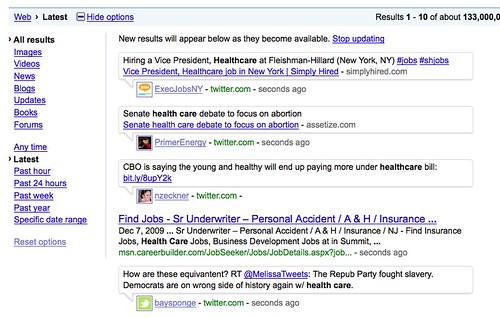 What do you get? Singhal said:

Down the line, content from Facebook and MySpace is promised — updates that come out of them and which users agree to share with the public. But right now, they aren’t there.

Google previously announced a deal with Twitter to take in its data. Bing has one too. Bing also has a Facebook deal for data, though it has yet to implement that data into search. Part of today’s news was that Google now has a Facebook deal plus one with MySpace, which Bing doesn’t have.

Google wouldn’t release any financial details about any of these deals. It wouldn’t even confirm if there ARE financial deals. For all we know, Google’s getting the information from Twitter, Facebook and MySpace for free. I believe Twitter’s suggested it is being paid from Google and Bing for its data (I’m checking on this). I believe Facebook has said there’s no financial arrangement between it and Bing for its data (again, checking on this).

MySpace is a particularly interesting situation. Rupert Murdoch’s News Corporation owns MySpace. Murdoch wants Google to pay for News Corp’s content. So when it comes to MySpace, is Murdoch getting paid for data there but not for Google News? Or is he happy to give that data away for free but not when it comes to news?

I haven’t had time to drill into the relevancy of what’s presented and compare it against places like Twitter Search or other real time meta services like Collecta.

How the information ranked? Singhal said only information deemed highly relevant is included. So spammy tweets, low quality pages and other content might not make it into the real time search “layer” that is used. After that, results are ranked by time.

How about ranking content in other ways. For example, if searching on a particular topic, does it make sense to show the most “authoritative” tweet first, rather than giving primacy to the latest ones?

“I would not be surprised if you start seeing far more of an emphasis on original tweets in our search,” Singhal said.

If you look at the second screenshot above, you’ll see that the “Latest” option in Google’s Search Options pane is flagged. Now look further up, and you’ll see that this is for “All Results” that Google has (or what’s called “Everything” results in the new Googel web search user interface being tested). 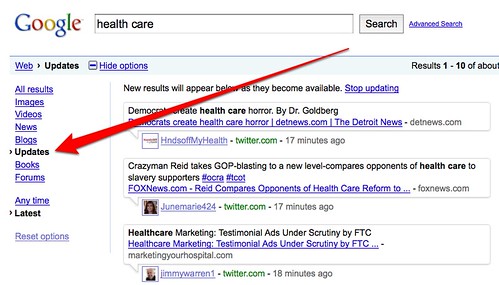 Under all results, there’s a new “Updates” option that can be toggled. So want to see the “latest” or real-time results that are only status updates (such as tweets?). Toggle the Updates option, and you’ll filter out other things like real-time news reports or new web pages that are added.

I like this feature, because to me, “real time search” means bringing back microblogged content, not news results, not freshly updated web pages and so on. For the detailed explanation about that, see my What Is Real Time Search? Definitions & Players post.

That post also explains a class of “real time” search that Google is not doing, such as allowing you to explore the most popular links that are being tweeted. The folks at some places like OneRiot can thus breathe a sigh of relief. Even Bing’s Twitter search retains some bragging rights.

Enter a URL into Google’s real time search service, and you don’t see much about what’s related to it in terms of real time commentary. For example, here’s what’s shown when I searched for information related to my live blogging of today’s Google news: 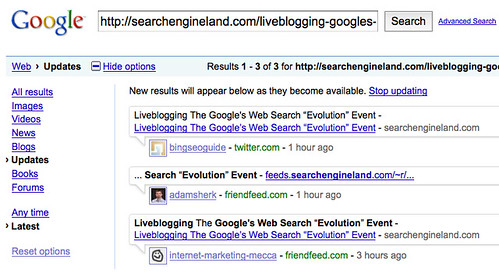 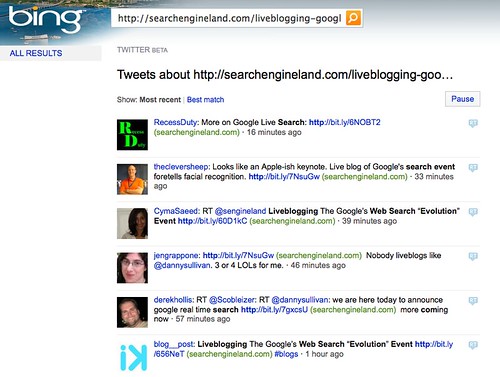 This may change, by the way. Google said that it be growing its real time search service over time, so watch and see. Also see Up Close With Bing’s Twitter Search Engine for more about Bing’s service.

Google also noted that it is expanding shortened URLs. You’ll still see the shortened version listed (say if it is from bit.ly or another URL shortener), but then you’ll also see the final destination URL. Content from that destination page is spidered.

Related to Google real time search is a new real times trends feature on Google Trends, which itself officially comes out of Google Labs today. Let’s do a screenshot:

On the right is what Google Trends had before, topics that are deemed popular based on searches entered into Google. By popular, these are things that are seen as out of the ordinary. Otherwise, you’d see queries like “sex” and “hotmail” always showing up.

On the left is what’s new, top trends based on Google’s analysis of real time content. This is important. The trends you see at Twitter, on its home page if you’re logged out, are based to my knowledge on what people are searching for on Twitter:

In contrast, Google’s real time trends — “Hot Topics” — are based on what it sees from analyzing the text of real time content.

I can’t say if one method is better than another. Both probably have advantages.

Below the Hot Topics list is a search box that effectively provides a front-end to Google real time search. Enter a search query, such as climategate, and you’ll get back matching real time results.

Currently, Google says there’s no plans for a dedicated standalone real time search page as you get for say Google News or Google Images. However, I can point you to a pseudo-page like this. Go here, and you’ll get a nice clean Google home page that is configured to search for real time information.

And how about real time search and its importance to Google overall? Was this really a major gap that could have killed the company?

Hardly, in my view. There’s no doubt that it’s good to have. It’s incredibly difficult to be a leading information source and yet when there’s an earthquake, people are instead turning to Twitter for confirmation faster than traditional news sources on Google can provide.

Google vice president of search products and user experience Marissa Mayer gave me a personal example of how having real time data can help Google. An avid skier, she found herself going to Twitter on a regular basis to get ski reports from people actually on the slopes, which she found more accurate than what some resorts and other reporting services were offering.

Google could have survived without a real time search component — in particular without the dedicated flow of microblogged updates — but it becomes a more complete and useful service with them. I’m glad to see the integration and am looking forward to see how it matures.

Still, in the long term for those trying to measure the search face-off between Google and Bing, it’s not real time search that’s the major battlefield. Instead, it’s personalized search that I think is far more important. And on Friday, Google unveiled with far less fanfare a major change in how it provides personalized results. For more on that, see:

Finally, thinking you heard something previously about Google doing Twitter search? You did, but that wasn’t Twitter search. It wasn’t real time search, either. It was social search, where Google looks at those you follow through Twitter or other social networking services and then shows you content just from those people, in response to a search.

Our Google Social Search Launches, Gives Results From Your Trusted “Social Circle” article covers that system and how it works in more detail. It’s completely separate from real time search. In fact, potentially you could do a search and get a section with real time results on the same page as results from your social network.