In December, Danny Sullivan sought to determine which of the major shopping search engines found the best prices for common products. The shopping engines compared in Danny’s articles were Nextag, Shopzilla, PriceGrabber, Google, Bing and TheFind: The Test Begins: Do Google Shopping & Other Shopping Search Engines Give You The Best Deals? The Test Continues: Which […]

In December, Danny Sullivan sought to determine which of the major shopping search engines found the best prices for common products. The shopping engines compared in Danny’s articles were Nextag, Shopzilla, PriceGrabber, Google, Bing and TheFind:

TheFind’s CEO Siva Kumar saw these articles and developed an internal tool to compare his site to these and other online shopping competitors. TheFind later decided to make that internal comparison tool public facing so that anyone could try it and compare product search results across sites. Clicking any of the branded links above the main results opens a window showing the same query on the selected site.

TheFind contacted us saying that it had been running tests of its results against the shopping engines discussed in Danny’s original articles. It looked at 50 queries in six shopping categories, using the same approach and methodology pursued in Danny’s articles.

The questions asked in TheFind’s research were: The reason these figures exceed 100 percent is because multiple engines may have “tied” in any given case. In other words, TheFind, Google and Shopping.com might have all found the best available price on the same item. The flip side of the lowest-price comparison is one involving “price premiums.” The chart above reflects how much users will pay above the lowest available price by using each shopping engine. (As the overall price winner TheFind used itself as the baseline.)

Because Bing and Yahoo had the lowest prices in only 14 percent and 8 percent of cases, for example, users who buy through them are likely to pay a premium: 25 and 31 percent more on average respectively.

One of the explanations that TheFind offers for its performance vs. the others is the fact that it indexes more stores and product sources. The chart below reflects the average number of sources found for the 50 queries examined.

On average TheFind offered 65 stores or sources for each of the 50 queries. Shopzilla by comparison offered an average of five.

TheFind also explored additional or enhanced content in search results. The company looked at availability of coupons, product reviews and local stores that carried the subject products. Across the board TheFind outperformed its competitors. 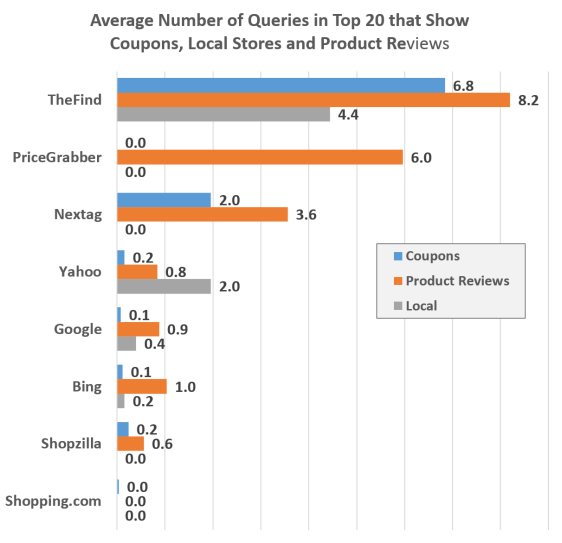 It’s important to reiterate that the data and tests above were all performed and provided by TheFind. We did not verify the accuracy of these results. However I spoke to company at length to discuss its testing and methodology. I don’t believe the company selected the queries based on a known outcome or otherwise artificially skewed these results.

However the fact that TheFind’s tool Compare.TheFind.com is publicly available allows skeptics and anyone else (including competitors) to explore and verify results. Let us know if you do and find anything that contradicts the above data.