A month ago, I wrote about my meet up with Google Israel, from my trip to Israel about two months ago. This week, I am back in Israel on a sponsored Blogger Delegation to meet with Israelis and see their way of business and life. Today, I had free time and used it to meet […] 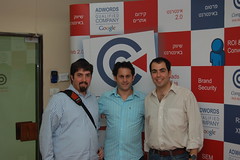 A month ago, I wrote about my meet up with Google Israel, from my trip to Israel about two months ago. This week, I am back in Israel on a sponsored Blogger Delegation to meet with Israelis and see their way of business and life.

Today, I had free time and used it to meet up with some of the larger search marketing agencies in Israel. The meet up took place at Compucall, one of the largest SEM companies in Israel. Several of those that attended have been in the SEO/SEM space for about ten years and have extensive experience both running an SEM company and performing SEM services. Gilad Sasson (aka Algoholic), Ophir Cohen, Itai Levitan and Olivier Amar are names some of you would know, if you have been in the industry for a while. So, getting a chance to sit down with them and just chat was valuable, to say the least.

Before the Compucall meeting, I went to lunch with Mayer Reich from RankAbove.com and then we went to meet Ophir, the CEO of Compucall. Ophir felt it would be a good idea to have Simon Gelfand of Bukisa and ArticlesBase.com talk about his product offering. That lead into discussion about what search marketers in Israel want. Truth be told, it is extremely similar to what any SEM wants. 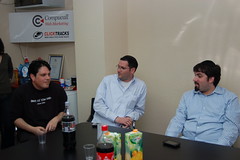 In my meet up with Google Israel piece, I wrote about how Google’s presence in Tel Aviv has helped expand the awareness and budgets for SEM services of Israeli-based companies. Itai Levitan expressed to me that he would love to see Yahoo and Microsoft set up offices in Israel as well. I know Microsoft has a very small user base in Israel relative to their US share. But in terms of Yahoo, even setting up a single office with one or two representatives that can help educate, as Google has done, would help agencies sell Yahoo search ads tremendously in the Middle East region. The bottom line is that Israel SEM agencies feel that it would be a win-win for Yahoo and Microsoft to set up offices here.

But what SEMs really want is for Yahoo to fix their search marketing platform. Itai told me that it is almost unusable. Olivier said that pulling reports is almost impossible. Gilad feels that Yahoo should go back to the Overture backend and dump the Panama interface. This is often what I hear from SEMs all over the world, and it is the same issue here in Israel. The word “upsetting” does not do justice to my feelings on Panama. All that time, money and resources put into that product — what a shame. 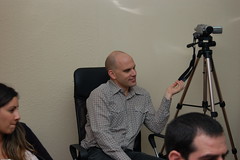 We also talked about analytics and how SEM companies should sell that as a service to their clients. Yes, Google Analytics is free, but most site owners don’t use it fully. Ophir and Itai’s companies are both Google Analytics certified resellers and they are able to sell these services as a value add. They add value by tagging marketing campaigns properly, using Google Website Optimizer to squeeze out every conversion metric possible and use these tools to make for the most efficient and streamlined marketing campaigns. Ophir explained that SEO was once a free way of gaining traffic to your site, but then agencies evolved and began selling SEO consulting services. Same here with analytics, Ophir said — the industry around analytics is growing and selling the services side of the software is both valuable and credible.

The last question I asked was how does SEO and paid search differ between Hebrew and English languages. Itai told me the main difference for him is that there are less publishers placing AdSense ads on their Hebrew online publications or blogs. You can find AdSense on tons of English content sites, but it has not grown that quickly on Hebrew sites. Since there is less inventory on the Google content network for Hebrew sites, that changes the strategy they deploy for Hebrew campaigns. Ophir said that savvy Israeli companies will show Hebrew AdSense ads for Israeli IPs on sites like TechCrunch. This way, they can advertise their products and services in Hebrew to Israeli users. Here is a picture of TechCrunch showing Hebrew ads on my computer:

I did not have a chance to meet all the local SEM/SEOs here in Israel, but hopefully in future visits we can meet up.