Roughly a year ago, AOL acquired Relegence, a search technology company that offers real-time information and data feeds on a subscription basis to Wall Street professionals. Now AOL is bringing the fruits of that acquisition to a newly redesigned Money & Finance site intended to go head to head with Yahoo Finance, which is the current market leader.

The new site presents huge volumes of public data in a more dynamic, visual form, including a range of interactive charts and graphs. Compare, for example, an old and a new page displaying the current quote for TimeWarner, AOL’s parent. 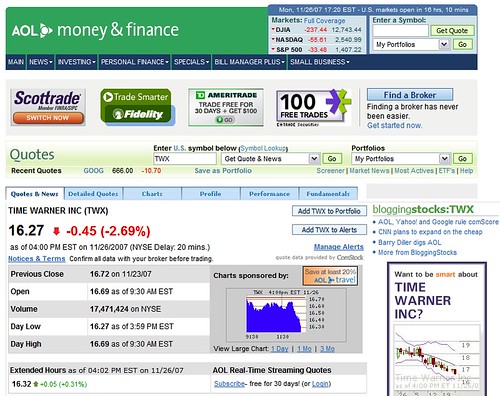 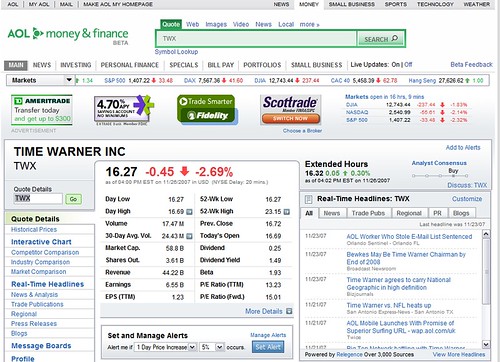 The amount of financial and company information here is almost overwhelming. Indeed, it would be to most ordinary users. But the new site’s features are largely directed at “power users” at the top of the financial food pyramid. Below is a shot of the new left-hand navigation column and all the data accessible on a company specific basis.

But perhaps most interesting to readers of this blog is the “news search” capabilities that the Relegence acquisition brings to the new site. Below is a shot of a module that allows customization of news and data feeds that are updated in real time. 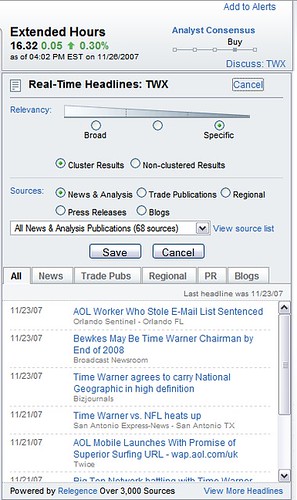 From a consumer standpoint, this free, real-time data is unique among consumer-oriented financial sites. Other sites offer somewhat comparable information but on a paid-subscription basis.

Beyond the financial information, however, this is a great news service that can deliver alerts on subjects or companies via RSS or email. And AOL intends to use the underlying Relegence technology on other properties.

AOL has other feature upgrades in store for Money & Finance that it intends to roll out in the coming months. Financial services was the second-largest ad revenue category in 2006 according to the IAB.