Brands are often struggling with other advertisers encroaching on their trademark terms in search ads. Sometimes brand trademarks are used by “friendly” advertisers such as resellers, but a study released today from BrandVerity shows that search arbitrage accounts for the majority of branded search competition. The study analyzed how core brand terms of more than […] Brands are often struggling with other advertisers encroaching on their trademark terms in search ads. Sometimes brand trademarks are used by “friendly” advertisers such as resellers, but a study released today from BrandVerity shows that search arbitrage accounts for the majority of branded search competition.

The study analyzed how core brand terms of more than 250 consumer brands in 10 verticals are targeted across the major search engines. Overall, it probably won’t come as too much of a surprise that trademark usage by competing advertisers was higher on AOL, Bing and Yahoo compared to Google and Google Mobile results. The differences are striking, however, as the chart below shows.

On a given Google search for a brand name, there’s about a 1 in 3 chance that a potential customer will see an ad by another advertiser using a brand’s trademark . On Bing, Yahoo and AOL, there were at least two competing ads per SERP, with an average of three competing ads for every ad from the brands themselves. 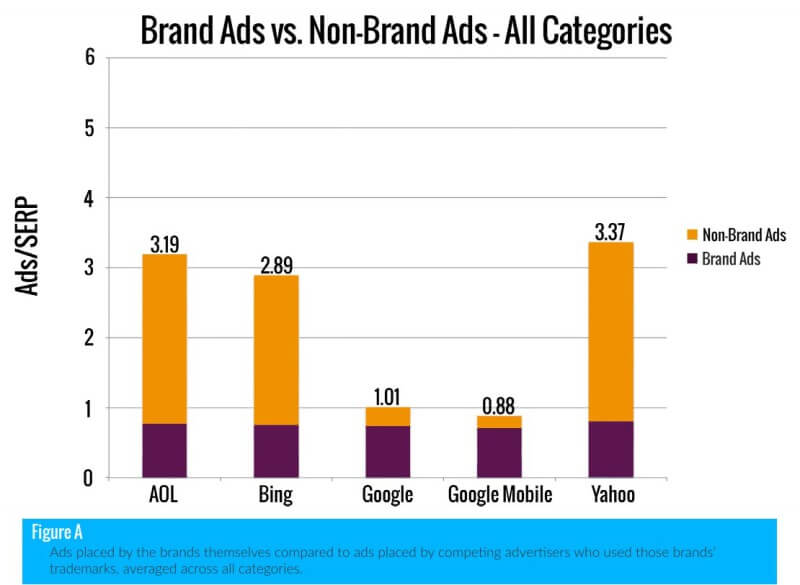 On Google, more ads from the brands being measured appeared than competing ads. Whereas on each of the other search engines — AOL, Bing and Yahoo — brand ads were outnumbered by competing ads on search results for their own core brand terms, which included the brand name itself, common misspellings of the brand name and URL searches for the brand.

In addition to brands filing trademark usage protection claims with Google, BrandVerity surmises that Google’s quality score acts as a gatekeeper of sorts, blocking less relevant ads from other advertisers from showing on explicit brand searches.

Search Arbitrage Dominates In Many Verticals

BrandVerity points out that search arbitrage is actually higher than often reported because sites identified as CSEs run ads in categories where product price comparison isn’t even available, such as home services and internet and telecom industries. Often, CSEs will display search ads on the landing pages for these ads — essentially search arbitrage. In these types of industry categories, BrandVerity bundled CSEs with Search Arbitrage.