With the exception of online, the ad industry is in a slump. Growth is in the low single digits and will only gain next year because of the US presidential election, European football, and Olympics. Accordingly, ZenithOptimedia has released an advertising forecast that reflects projected growth of a modest 4.1 percent in the US and 6.7 percent globally. It’s covered by AdAge and PaidContent.

Among the highlights as reported in AdAge:

Global online ad spending will rise to $44.6 billion in 2008 from $36 billion today. The Internet’s share of the global ad market will grow to 9.4 percent from 8.1 percent currently.

The forecast predicts continuing share and revenue losses for print newspapers, radio, and magazines. TV is expected to be flat for the next couple of years: 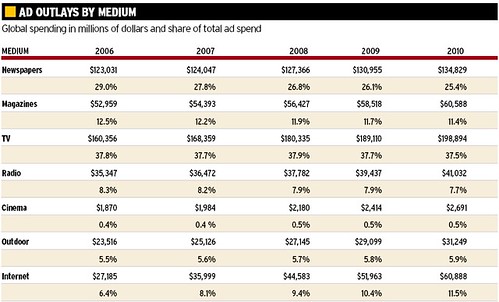