Yahoo’s product teams are officially on notice. Shortly after announcing Q1 earnings yesterday, new Yahoo CEO Scott Thompson dropped a bomb during the analysts’ call when he said the company will be “shutting down or transitioning roughly 50 properties that don’t contribute meaningfully to engagement or revenue.” He went on to say that Yahoo’s focus […]

Shortly after announcing Q1 earnings yesterday, new Yahoo CEO Scott Thompson dropped a bomb during the analysts’ call when he said the company will be “shutting down or transitioning roughly 50 properties that don’t contribute meaningfully to engagement or revenue.”

He went on to say that Yahoo’s focus will be on its “core media connections and commerce businesses,” such as Yahoo News, Yahoo Sports, Yahoo Mail and a few other successful Yahoo properties.

But what about the 50 properties that are destined to be shut down or transitioned soon? Let’s take a look at what might and might not be on Thompson’s list.

Would Yahoo shut down one of its most beloved properties? As a user since 2004, I shudder at the thought. Flickr is still one of the most popular photo-sharing sites on the web — it had almost three million photo uploads per day in March, according to Yahoo’s own figures.

So that would appear to meet Thompson’s standard for saving properties with strong engagement. But does Flickr make any money for Yahoo? It sells inexpensive “pro” memberships and shows ads to non-Pro account holders, but the income from those is probably minimal. Yahoo reportedly fired at least some, and possibly all of Flickr’s customer service team earlier this year. But the product is still being developed — witness yesterday’s Android app upgrade as evidence.

My guess is that Flickr stays alive, at least temporarily. But that may be more of a hope than anything. It may be a stronger sale candidate than most other Yahoo properties mentioned below, especially since Instagram was worth a billion dollars to Facebook.

Like Flickr, Yahoo Answers is an extremely popular site that gets high marks for engagement but probably doesn’t make much money for Yahoo.

It’s an active product, at least judging by today’s announcement of changes to its level system (changes that its most active users won’t like, ironically).

My gut feeling is that Yahoo Answers, despite the high engagement, is a more likely shut down candidate than Flickr. But it’s not as likely to be chopped as the next eight Yahoo products I’ll list.

8 Yahoo Products That Could Be Shut-Down Candidates

Once a popular event guide, Upcoming seems to be a ghost town these days. The most recent post on the Upcoming News Blog was back on December 15, 2010. It announced a beta version of Upcoming’s new site design. You can still see the beta design at beta.upcoming.yahoo.com, but the main site hasn’t been touched. Knock, knock … is anyone home? Once a must-use site for link builders, the Yahoo Directory is largely an afterthought now — including for Yahoo. Some years ago, the company stopped posting a list of daily directory additions.

In 2010, Yahoo shut down directories in France, Germany, Italy and Spain; the UK and Ireland directory followed soon after.

At the time, Yahoo said the U.S. directory was safe. That’s probably not the case now. 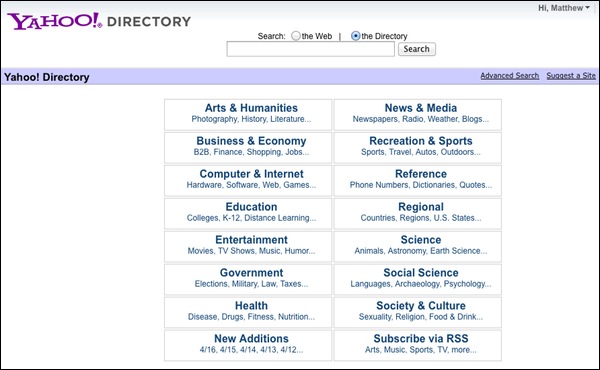 Pipes seems to be a fairly popular site in some circles, and offers some interesting tools for collecting and curating web content. But it may not meet Thompson’s credo of focusing on high engagement and high revenue services, and it’s not at all consumer-facing.

Yahoo Groups is almost in the same place that Flickr and Yahoo Answers is. It has a huge userbase, but it’s probably not making the company enough money to justify keeping it alive. Yahoo Groups hasn’t seen any significant development in years — at least nothing’s that plainly visible to its users.

This is a pretty cool service that reveals search trends and also serves as something of a keyword research tool. But with Yahoo already having shut down Yahoo Site Explorer, we have to wonder how committed the company is to products like this that are perhaps geared more toward online marketers than Yahoo’s general consumer audience.

Yahoo’s location sharing service never seemed to catch on, at least to me. It stores your location so that other sites and services can use it. But the app gallery isn’t exactly a who’s who of social/local/mobile networking.

Google Translate seems to own this niche, and Babel Fish probably doesn’t have enough user engagement to justify its existence at this point. (It also looks like Yahoo hasn’t touched its design in years, for whatever that’s worth.)

Koprol is an Indonesian site that’s similar to Foursquare. Yahoo acquired it in 2010, and there were recent reports that its entire developer team was fired. So long, Koprol.

There are literally dozens of other Yahoo products and services that could be on the chopping block — like Smush.it and Yahoo Avatars, for example. Many are services you’ve never used and perhaps haven’t even heard of.