Compete: Google Keeps Stomping The Others In Search Traffic

The latest search engine share stats for May 2008 from Compete show Google hitting yet again another high. Let’s do the numbers, including the debate on whether Microsoft Live Search Club searches should be counted plus how everyone might start generating queries in new ways. Here’s the rundown for May 2008, for the share of […] 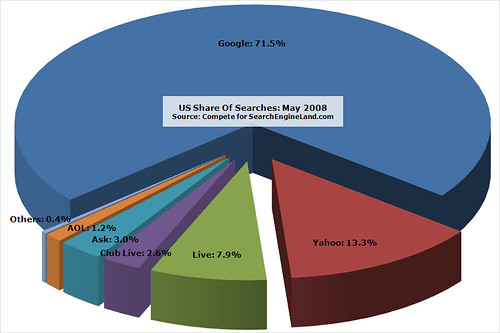 from Compete show Google hitting
yet again
another high. Let’s do the numbers, including the debate on whether
Microsoft Live Search Club searches should be counted plus how everyone
might start generating queries in new ways.

Here’s the rundown for May 2008, for the share of total searches each
search engine handled for the United States:

In the pie chart above, I’ve shown slices for Microsoft Live and Live
Search Club separately.
Microsoft On Search
Gains & Live Search Club covers the Live Search Club program that allows
people to win prizes for searching and how it boosted Microsoft’s traffic
after it was launched — plus the debate over whether these are "real"
searches.

That debate caused Compete to initially exclude Live Search Club from its monthly figures. It added them back in last month. I’m slowly
revisiting the issue of who counts these (comScore also said it does) and trying to
get more granular about what exactly is counted when one of these services
says "Google," "Yahoo," "Microsoft" and so on.

Let’s zero in more on Live Search Club. To start, let’s get some trend
data. Here’s the past year’s worth of share: 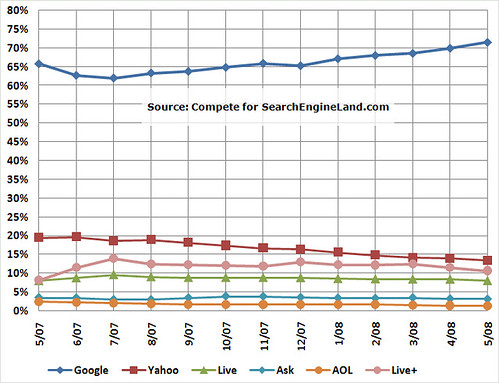 As my caveats at the end of these types of reports always stress, search
share isn’t the entire story. It’s possible that a search engine will drop
in share but GAIN in actual searches, if the overall number of searches
happening increases. So let’s look at the volume of searches each is
handling: 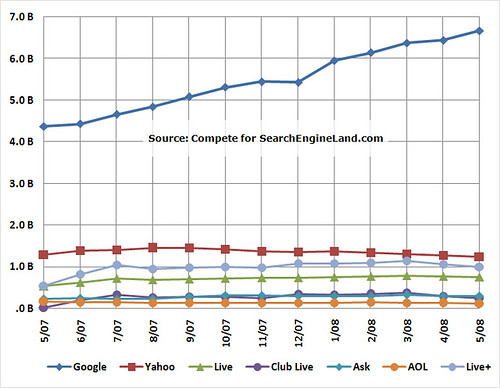 Ouch. Again, Google is stomping on everyone else in terms of number
of searches it handles (the scale shows billions of searches handled per
month). Let’s push Google aside to better see what’s happening with the
rest: 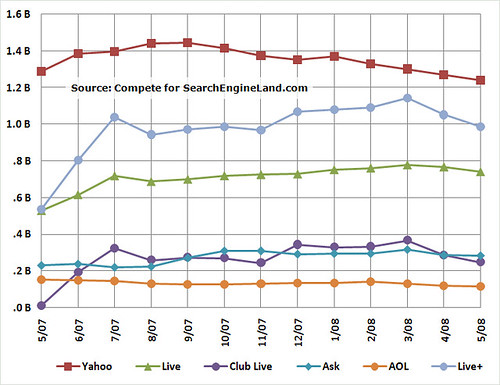 No good news for Yahoo. After growing queries early last year, it has
largely seen month after month of decline.

Better news for Microsoft. Club Live does seem to have helped it grow
"regular" searches on Live until April and May of this year. Club
Live searches were down then; so was Live Search. That suggests Microsoft
can "buy" its way into the search game, but so far, only to a mild degree
— and that it might have to keep on buying.
More importantly, the gains have hardly been a game changer that threaten Google at all.
Mosquito on elephant, you pick your metaphor.

Of course, Microsoft has more in mind. The
Live Search Cashback
program had just started at the end of May. That’s aimed at many more
searchers than Live Search Club is positioned toward. I still haven’t felt
it would be a game changer either, but we won’t get a real read on that
until June 2008 figures come out.

Other things that will help Microsoft will be the
new 404 error page
program it launched, if many sites take it up on that offer. That’s
because if the error pages generate a Live Search URL (as I believe they
do), then Live Search will get that search traffic counted toward its
totals.

Fair? Maybe, maybe not. Consider also
when Google started
showing search boxes for sites right below their listings in Google
(such as for
discovery
channel). While that’s helpful for searchers, it also ensures that
Google picks up traffic for a search that otherwise would not have been
counted toward its domain. Could some of that be adding to the rise it saw
since the feature came out in early March? March to April traffic didn’t
grow much, but it might have been rolled out more since then.

Expect more of these issues to continue to be raised as the search wars
heat up. Everyone’s going to look for a way to get more searchers to count
toward their totals. For the record, this is what Compete told me they use
when compiling what "counts" toward the overall figures:

Postscript: In comments below, you’ll see how posting the regex
rules caused Compete to find they were undercounting Yahoo. They’re in the
process of rerunning the figures. In the meantime, here’s a fast update:

Yahoo significantly jumps up in terms of share and volume of searches
with the revised figures. Note that Live+ is the combination of Live and
Club Live and that line doesn’t get counted in the bottom line total, or
that would be double-counting.