In another case of major mapspam (discovered first by Imnotadoctor), an SMB-local internet market firm, Big Local, has captured many of the top positions in the Google Maps “onebox” for the category “internet consulting.” Below are some examples from various cities.

And the worst example, Boston: 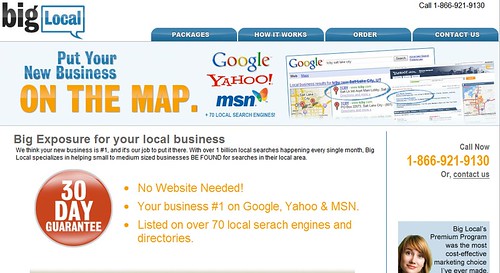 The “about us” link is broken, so it’s impossible to tell who’s behind the site. A Superpages listing puts the company at “380 W 200 South #509, Salt Lake City, UT 84101.” I called but was on hold for about six minutes before hanging up (my wait time seemed to keep getting longer according to the automated voice).

The company “guarantees” that clients will rank “#1 on the major search engines,” which is a false promise. Ironically, however, the company seems to have achieved that objective for itself in some of the examples above.

We have not sought comment from Google, but once these listings are discovered they will undoubtedly be shut down.