It’s been interesting to watch the Siri Abortiongate scandal blow up in Apple’s face over the past few days. Apple is learning for the first time what it’s like to run a search engine. People hold you accountable for everything, even if you the information isn’t even from your own database.

Google is a battle-scarred veteran in these matters. Why does an anti-Jewish site show up in response for a search on “Jew?” Why did President George W Bush’s official biography rank for miserable failure? Why do you get THAT result for a search on Santorum?

Sometimes, Google’s opens up to explain some of these oddities, which tend to have reasonable explainations. Not always. The company stayed closed-mouthed about why exactly a search for “climategate” was suggested and suddenly disappeared, taking ages to finally explain why. That harmed it.

The same silence is harming Apple now. Sure, the company has issued a statement to various outlets saying there’s nothing intentional happening, and it’s merely a bug that needs to be fixed. Here’s one of the statements from Apple CEO Tim Cook, given to NARAL Pro-Choice America:

Our customers use Siri to find out all types of information and while it can find a lot, it doesn’t always find what you want. These are not intentional omissions meant to offend anyone, it simply means that as we bring Siri from beta to a final product, we find places where we can do better and we will in the coming weeks.

Here’s another, given to the New York Times:

“Our customers want to use Siri to find out all types of information, and while it can find a lot, it doesn’t always find what you want,” said Natalie Kerris, a spokeswoman for Apple, in a phone interview late Wednesday. “These are not intentional omissions meant to offend anyone. It simply means that as we bring Siri from beta to a final product, we find places where we can do better, and we will in the coming weeks.”

But opening up on how exactly Siri works would help. It would help a lot. Without that, the speculation continues, as you can see in this article from The Raw Story:

Kerris did not, apparently, explain why Siri, although still in beta, has no difficulty locating escort services, plastic surgeons that will perform breast augmentation procedures or hospitals to direct users if they have erections lasting longer than five hours (a condition known as priapism).

I’ve got no inside knowledge of how Siri works. Heck, we weren’t allowed to attend the launch event of Siri, despite Search Engine Land being the leading news site that focuses on search. But because I’ve covered search so long, I can take a pretty good shot at explaining what’s wrong, why Siri will suggest where you can get Viagra or bury a body but not where you can find an abortion.

It Can Find Viagra, But Not…

If Siri can tell us about Viagra, it should not provide bad or no information about contraceptives or abortion care.

Personally, I can’t get Siri to search for Viagra. It insists on seaching for “biography” no matter how I speak Viagra. But here’s an example of what the ACLU is upset about, taken from the Siri Failures, Illustrated blog post from Amadi: But ask for contraceptives, and no luck. Here’s another example from Amadi:

Actually, this isn’t the case. If I ask it for condoms, I get an answer: Asking for a brand name, like Trojans, however, doesn’t help me.

What’s going on here? First, Siri doesn’t have answers to anything itself. It’s what we call a “meta search engine,” which is a service that sends your query off to other search engines.

Siri’s a smart meta search engine, in that it tries to search for things even though you might not have said the exact words needed to perform your search. For example, it’s been taught to understand that teeth are related to dentists, so that if you say “my tooth hurts,” it knows to look for dentists.

Unfortunately, the same thing also makes it an incredibly dumb search engine. If it doesn’t find a connection, it has a tendency to not search at all.

When I searched for condoms, Siri understood those are something sold in drug stores. That’s why it came back with that listing of drug stores. It know that condoms = drug stores.

It doesn’t know that Plan B is the brand name of an emergency contraception drug. Similarly, while it does know that Tylenol is a drug, and so gives me matches for drug stores, it doesn’t know that acetaminophen is the chemical name of Tylenol. As a result, I get nothing:

Is Siri also against headaches? I don’t think so, but it easy to pursue one line of questioning in various ways, such as everything about abortions, and come away with a skewed view that Siri is pro-life rather than just buggy in general.

Indeed, it can be horrifying. That search for the morning after pill? Siri comes up with an almost mocking sounding “Is that so” response. It’s worse, bone-chillingly worse, when “I was raped” is searched for: 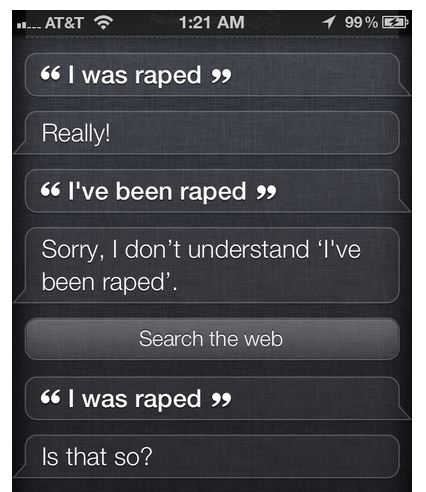 Now search for “I was laughing,” and you get the same type of responses: What’s happening here? Does Siri really understand that raped means rape and is mocking someone? Or are we seeing a series of responses when it really doesn’t know what you want about anything and instead shifts into a conversational mode that some engineers thought might be funny?

But wait, what about this:

If you’re really looking hard for some smoking gun, then maybe this is one. As Amadi post said, this is proof that Siri does know what rape is.

Sure, it’s proof that it knows that the exact word “rape” is linked to sexual abuse treatment centers. It’s not proof that Siri understands “raped” — which is a different word from rape in spelling — has the same meaning, only in the past tense.

Humans easily know this stuff. For search engines, it’s hard. It’s perhaps harder for Siri, ironically, because is tries to make life easier for people by not requiring them to be direct.

In Google Voice Actions for Android, if you wanted rape resources, you would literally says “search rape resources,” and you’d get web search results. You can do exactly the same with Siri, if you want to be literal. But because it tries to be helpful, it can also be limiting.

No Abortion Clinics, No Tool Stores….

Meanwhile, as for not finding those sexual abuse centers, I’m guessing that’s because there were simply none nearby that expressly defined themselves that way. That leads me to the now infamous inability for Siri to find abortion clinics: Guess what? It also cannot find hardware stores, when I try to find them by asking for a tool store, even though there are plenty of hardware stores near me:

In both cases, Siri understands this is a local search that I want to do, which means that it should do my search over at Yelp, the partner it uses for local listings.

But Yelp Has Them!

If I search at Yelp for abortion, I get plenty of matches — one of them a local Planned Parenthood clinic: Why is Siri deliberately suppressing this information? Notice all the bold mentions of “abortion” in those listings. Those are from comments people have left. They’re not the names of the businesses.

Siri’s not finding abortion clinics because Planned Parenthood and other places that perform abortions don’t call themselves that, not in their names, nor have they been associated with a category for that. That’s the best guess I have in this.

Planned Parenthood is in the “Medical Center” category, and while Siri may have linked businesses in that type of category to a variety of medical procedures, for whatever reason, abortion isn’t one of them.

Similarly, for whatever reason, Siri hasn’t linked “tool” to the “Hardware Stores” category. The reason, as is the case with abortion, is almost certainly not because of a conspiracy against tools.

But You Do Get Abortion Clinic Listings

It’s almost good that Siri isn’t able to tap into the Yelp comments to help extend its search, because some might be annoyed to get a match for a car service or a Japanese grill. Others might see a church listing coming up first and assume a further attempt to push a pro-life agenda.

Indeed, one of the things that kicked all this attention on Siri and abortion searches off was an article at The Raw Story where a search in Washington DC yielded “abortion clinics” that really were pro-life centers. From the story: 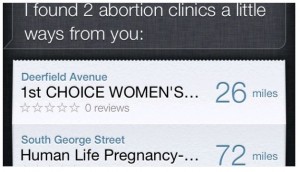 Woah. What’s going on there? I don’t know. It’s especially weird in that to even find these companies in Yelp, you have to hunt and hunt for them. In fact, nothing I could do brought up the first listing, but I did find the second.

Looking at that, I note that it’s not assigned to any particular category. Nor is the word “abortion” mentioned on the page. It makes me wonder if Yelp, lacking good first-hand information about this business, has instead pull information in off its web site — which includes terms like abortion – to help classify it.

In some other cases, Siri — depending on Yelp information — does seem to get it right. From a comment on the story at The Raw Story:

I highly doubt it was intentional, probably more to do with places not listing the word “abortion” in their titles. i just tried it and she pointed me right to the nearest clinic in boston, for whatever that’s worth.

In some cases, Yelp is clearly passing along information to Siri that it has things it believes to be abortion clinics. But that information is pretty limited, it seems.

I’ll end with one more thing. How can Siri dumb enough not to list an abortion clinic near that CNN reporter yet clever enough to suggest that if you want to bury a body, try dumps and swamps: That’s again down to programmers thinking this would be funny. They’ve hard linked this type of query to react that way, and it was funny. That’s probably the case with the searches for escort services that do work.

But now, when a serious issue like abortion searches come up, it causes confusion between the things that Siri can figure out automatically (with a lot of weakness) and the things it seems incredibly clever about (with some human help).

No doubt Apple will fix things so that searches for abortion clinics will bring back relevant resources. No doubt there will be plenty of other things that remain buggy — and even when it comes out of beta, you can expect that. That’s the nature of search. Just ask Google.

Now have a chuckle. Stephen Colbert did a wonderful send-up on the whole Siri/abortion issue last night:

For related news, see coverage from around the web at Techmeme.