After being in testing for literally years, Google Suggest is finally coming to Google.com. This is the feature where as you start to type in the search box, related searches automatically appear below where you are typing. For example, start typing [olympics] into the search box at Google Suggest, and below the box, you start […] 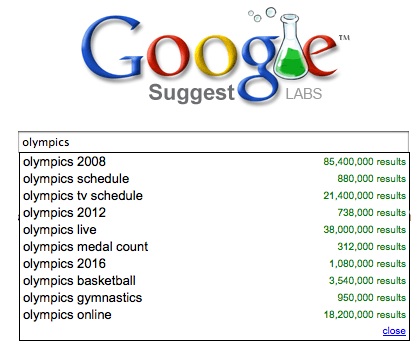 After being in testing for literally years,
Google Suggest is
finally coming to Google.com. This is the feature where as you start to type
in the search box, related searches automatically appear below where you are
typing.

For example, start typing [olympics] into the search box at Google
Suggest, and below the box, you start seeing suggestions such as:

It’s easy to move your cursor down to any of the suggestions to select
that as your search.

Google Suggest was rolled out as a
Google Labs project back in December 2004. At the time, several other
search engines had already been offering drop-down suggestions similar to
Google Suggest, so Google was hardly a pioneer in offering them.

Since then, Google has offered Google Suggest selectively, such as
through:

Oddly, it’s taken nearly four years since then for the feature — which
is very useful — to finally make it to the Google home page. What took it
so long? Google told us:

Quality is very important to us, and since so many people visit the
Google.com homepage, we wanted to make sure to evaluate and refine our
algorithms to provide a good experience using Google Suggest.

Well, it’s finally here. More and more
people should see it appear, with a full rollout expected by this Friday.

The suggestions, by the way,
come from looking in
aggregate at searches that happen on Google and listing popular ones that
contain the word you appear to be entering into Google. Next to each
suggestion, Google shows you the number of Google results that match the
suggestion. I’ve always found that odd — I’d rather Google show some metric
related to how popular that suggested query is, since that’s the basis of
why you’re being shown these words.

If you like the idea behind Google Suggest, be sure to also check out
Yahoo. It offers a more sophisticated query suggestion tool.
Search Suggestions
On Steroids: Yahoo Search Assist has more about that. Over at Live
Search, you don’t get query suggestions when typing in the search box. But
they will show "Related Searches" links in the top right hand corner of
search results, in some cases.