The impact (and lack thereof) of Google’s mobile popup algorithm

Back in August 2016, Google warned that it would be releasing an algorithm to crack down on interstitials on mobile pages. Now that the update has been live for a month, columnist Glenn Gabe shares his findings on the impact. It’s not often that Google announces an algorithm update in advance. But when they do, not only can webmasters prepare for that update, we can also track its rollout once Google pulls the trigger. That provides a rare opportunity to gauge the impact of the algorithm update and determine what its effects are.

In August of 2016, Google announced that they would be rolling out an update on January 10, 2017, that could impact URLs employing intrusive mobile popups or interstitials. For example, if a URL presented an interstitial that covered a substantial part of the content, then that URL could be demoted in the mobile search results. The web as a whole cheered, as many users were extremely frustrated by aggressive mobile popups.

So, as January approached, many SEOs, webmasters and business owners wondered what the actual impact would be. Would there be mass casualties, minor bumps in the algorithmic road or something in between? Based on Google’s announcement, you would think that sites employing intrusive popups or interstitials would have gotten smoked by the algorithm. That would make sense, but when you’re dealing in an algorithmic world, the devil is in the details.

Preparing for the mobile popup algorithm

As the rollout neared, I had many questions. Would the update actually work? How extreme would it be? Would there be loopholes? How would it impact branded versus non-branded queries? Would large-scale sites be impacted as much as smaller sites? And so on and so forth.

That’s why I prepared for the update by collecting as many sites using mobile popups or interstitials as possible. My goal was to benchmark those sites and then gauge the impact as the mobile popup algorithm rolled out. I’m now tracking close to 70 domains on my mobile popup list — and those sites are across verticals, including news publishers, entertainment, sports, e-commerce retailers, bloggers, music and more.

Starting on January 10, I began checking my list twice per day to see which sites were still breaking the rules and which ones weren’t. And for the ones breaking the new Google mobile popup law, how much negative impact would they see? Would they see any impact at all?

My travels along the popup algorithm trail

My research took me across many sites, both large and small, across many categories and locations. It was fascinating to see which sites raised the white flag and stopped using popups or interstitials and which ones stood their ground and kept them. It was also eye-opening to analyze the various ways websites employed popups and interstitials in this new world (if they kept them). It was enlightening, to say the least.

And of course, I was able to see many different types of ads and interstitials, including benign newsletter signups, aggressive ads that take over your screen, autoplay video in popups, broken ads in popups, and even malware and malicious downloads from ads in popups. There were times I felt like I needed battle armor while visiting some sites.

Below, I’ll cover the impact, the non-impact, the natural side effects of a preannounced Google algorithm update, examples of popups and interstitials, and other interesting notes. So join me on a ride through mobile popup land.

When the rollout began, I was excited to check my list and determine if there was any impact. As you can guess, there wasn’t much to report on the first day. The algorithm had to fully roll out, so I began checking my list twice per day to gauge the impact. And as I was checking the mobile SERPs, I ended up finding even more sites using mobile popups and interstitials. So my list was naturally growing as time went on.

On January 12, I noticed what I believed were the first signs of impact, and I wrote a post to document my findings. My plan was to keep adding findings to that post as I came across more and more impact.

Well, that didn’t turn out very well. After some initial movement, there seemed to be very little impact (if any at all).

I kept updating my post with disclaimers about the lack of impact I was seeing. I was floored. I thought for sure the domains I was tracking would see some movement, but I was wrong. I checked twice per day, only to see many of the URLs from those domains ranking exactly where they did prior to the rollout.

Examples of popups and interstitials still in use

You might be wondering what I’m seeing when checking sites. Well, I’ve seen it all since January 10: newsletter signups, popups on scroll, delayed popups, multi-ad interstitials, autoplay video, broken popups, malware, malicious downloads, multiple popups on one page, and so on.

Without revealing the sites, here is a potpourri of popups and interstitials I have come across during my travels. These are all from URLs that currently rank highly for competitive keywords — and ranked there before the algorithm update rolled out. Also, the desktop and mobile rankings are equivalent. In other words, I’m not seeing a drop in the mobile SERPs when compared to desktop, which would happen if the mobile popup algorithm were impacting rankings.

I’ll see you on the other side. That’s where I’ll cover the true impact of the mobile popup algorithm — and it might not be what you’re thinking. 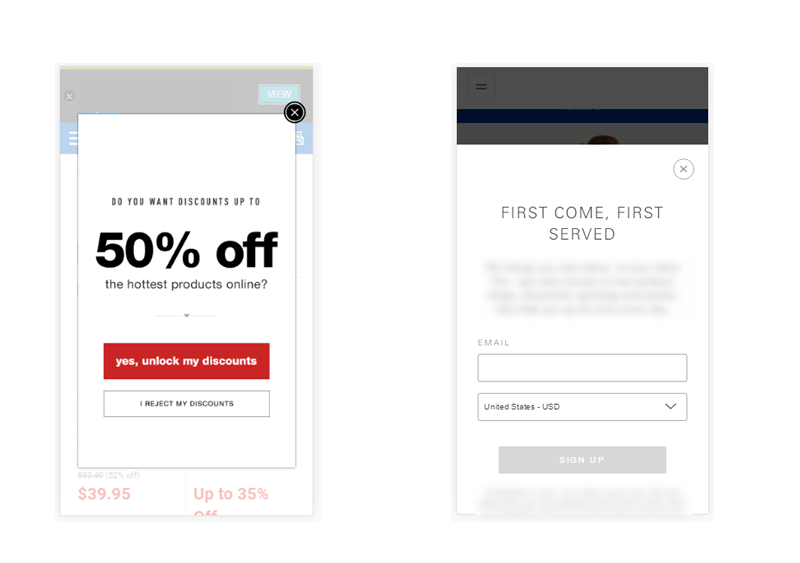 The true impact of the mobile popup algorithm

Well, the true impact has nothing to do with mobile rankings being impacted, a slide in mobile traffic or anything related to SEO. Instead, it has everything to do with the reaction of publishers to the news that the algorithm was going to roll out.

For example, many publishers removed mobile popups and interstitials as January 10, 2017, approached. They simply didn’t want to get hit or test the algorithmic waters. I saw this a lot as I was collecting sites that were employing mobile popups.

This also included sites removing the popups after January 10. Not every company knew about the algorithm update, so some were late to the game. My guess is that the algorithm got on their radar based on news of the rollout, so those publishers had a knee-jerk reaction and simply removed their popups without gauging the actual impact. They basically trusted that the mobile popup algorithm was working without evidence of it actually working.

And I get that. If you’re not neck-deep in SEO, you might not be familiar with the gray area of algorithms, and you might not know that some algorithm updates simply don’t work as expected. For those people, they just knew it was rolling out, that it could potentially negatively impact their rankings and traffic, and they pulled the popups and interstitials from their sites.

But like I said earlier, the devil is in the details. Again, I’m not seeing any widespread impact from the mobile popup algorithm as I write this post.

High risk, high reward: Will Google turn up the dial?

And here’s the rub. The publishers I mentioned earlier that stood their ground and refused to remove their mobile popups and interstitials have braved the mighty tsunami that never arrived. They stood on the beach facing a powerful surge of water that would surely suck the mobile life out of their sites… and nothing happened.

But that’s for now.

Google can absolutely turn up the dial and strengthen the mobile popup algorithm at any time. And if they do, then those sites using mobile popups or interstitials could get smoked. But that’s a big could.

Now, I’m not saying mobile popups are a good thing. I actually can’t stand most of them, and users overall hate them. That should be enough to rid them from the web, but they do work conversion-wise (unfortunately).

So, we have a situation where an algorithm that should impact URLs employing mobile popups is not living up to expectations, and a marketing tactic that drives conversion was removed from many sites. I don’t know where we go from here, but I fear more sites will test the algorithmic waters and add those popups back. And it’s hard to blame them.

So, based on what I explained in this post, I’ll provide some closing points below.

When January 10 arrived, I was eager to gauge the impact of the mobile popup algorithm. But what I wasn’t prepared for was to see very little happen. And that’s exactly what occurred while checking many sites still using mobile popups and interstitials.

Moving forward, keep an eye on my Twitter feed and my original findings post. I will keep checking my list, and checking it twice, in order to see if the mobile popup algorithm is being naughty or nice.