The 2011 Santa Tracker Review, From NORAD To Your Phone!

It’s Christmas Eve! Santa Claus is on his annual trip of delivering presents to good little boys and girls around the world. Time also for our annual tradition, telling you how to track Santa using the internet, by smartphone and even through good old-fashioned voice telephone calls. NOTE: If you’re looking for the latest information […]

It’s Christmas Eve! Santa Claus is on his annual trip of delivering presents to good little boys and girls around the world. Time also for our annual tradition, telling you how to track Santa using the internet, by smartphone and even through good old-fashioned voice telephone calls.

This is my seventh year writing about ways to track Santa. When I started in 2005, there were a variety of different services. Since then, most of these have disappeared, unable to match NORAD Track Santa.

NORAD is the US-Canadian military organization that tracks missiles and other potential threats from the sky. But on Christmas Eve, the group tracks not a threat but a treat, Jolly Old St. Nicholas and his eight reindeer. Or nine, if the conditions call for Rudolph to light the way. NORAD began tracking Father Christmas more than 50 years ago by accident. A store ad invited kids to call for Santa updates. But the phone number was misprinted. Calls instead went to NORAD’s predecessor, CONAD. Rather than disappoint those children, high-tech radar technology was employed to spot Santa.

In 2007, NORAD officially partnered up with Google, which knows a thing or two about finding information. The NORAD Track Santa site sprouted a range of new Santa tracking tools, as a result. Google is once again helping out this year.

Below, you’ll find a close-up look at what the site offers. Links are to the English-language version of the site. If you need another language, select that from the site’s home page. Further below, I’ll also cover other Santa Claus tracker tools and tips.

When you first come into the site, if you have the Google Earth plug-in (more about this below) you’ll be shown a live shot of Father Christmas flying over his current location, along with where he is headed: 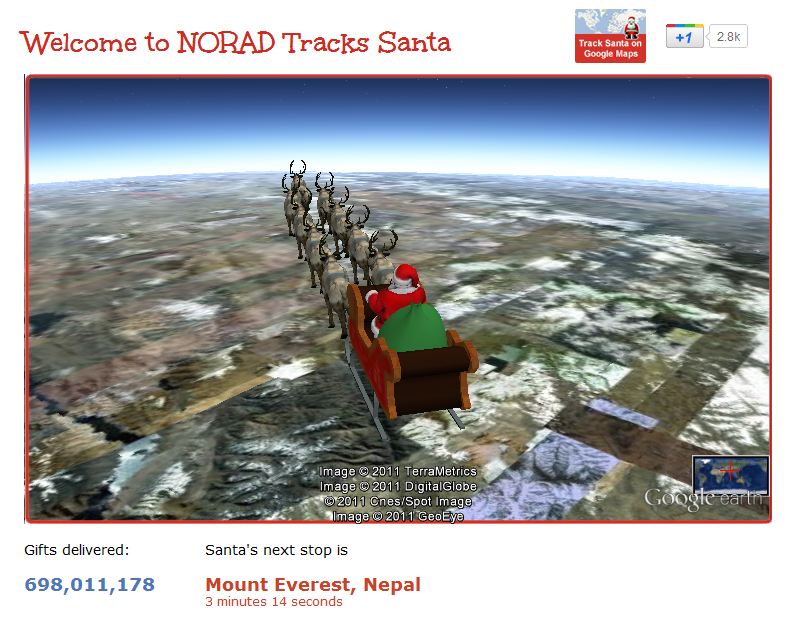 If you don’t have the plug-in, you’ll be shown a map of Santa’s journey around the world. NORAD uses radar, satellites, fighter jets and SantaCams to plot this map. For those with the plug-in, to reach the map, click on the “Track Santa On Google Maps” button above the map or go to the map page: If you click on Santa himself, you’ll get information about where he’s currently visiting: Click on any of the little gift icons to learn more about where Kris Kringle’s been: Click on the video icons for a special treat. You’ll see a Santa fly-by around local landmarks:

The Videos page lists all the fly-bys that have been recorded already. You can also find videos on the NORAD Tracks Santa YouTube channel. Here’s Santa flying over Mount Everest: No access to a web browser? NORAD’s still got you covered.

You can call or email the tracking center shown on the right get an update on where St. Nick is currently at.

Here’s an example of how one looks that I received this year:

The phone and email lines open at 6am Eastern Time.

On the picture notes the White House posted, some calls were apparently routed to her in Hawaii.

Want to see Father Christmas flying in real-time? Visit this page with your web browser for a Google Earth view of his journey, which will look like this: If you don’t do anything, Santa will fly right off the real-time cam. Click the “Follow Santa” button to employ the high-speed auto-follow mode to keep him in site.

Near major cities, you should see him zipping around delivering presents so fast that only red streaks are visible.

You’ll need a special plug-in for this to work. The page should prompt you to install this, if you don’t have it. Otherwise, you can find it here.

If you have Google Maps For Mobile, you can find Santa Claus by simply searching for the word “Santa” using the app. Santa’s current location will be shown. Here’s how it looks in the iPhone on the left and Android on the right: For the lazy who just want to speak to their phone to find Santa, here’s a special Christmas edition of our Siri versus Google Voice Actions head-to-head test: Above, I said “Where’s Santa” to my iPhone 4S (on the left), which just confused Siri. But on my Android-based Droid Charge (on the right(, Google Voice Actions turned that into a search for “Map of santa” and brought Santa’s location up in Google Maps.

The Google Maps For Mobile app is available for all major smartphones, including BlackBerry and Windows Phone. It’s not a flashy presentation, but it works, and it’s free.

If the Google Maps For Mobile application isn’t enough for you, there are a variety of iPhone apps that are offered.

My favorite from last year is back again, Santa Tracker 2011 from Talus Media. It shows your location in yellow and Santa’s in red, along with a countdown clock to when he should arrive near you.

I also like the “The List” that allows you to put people down as either “naughty” or “nice.” I’ve had lots of fun teasing my kids throughout Christmas Eve, moving them back and forth on the list. They love it.

The app is $1, but it has a strong free rival this year, the official NORAD Tracks Santa app for iPhone. That provides a countdown clock, Santa’s current location and an “Elf Toss” game — think Angry Birds, but with an elf and a sleigh.

Another free app that caught my eye was Where Is Santa Lite. I like the radar beam that swings across the map of the world. Santa’s locations are highlighted, along with his current and next location. Clicking the “My Home” button gives you a location-specific countdown. On Android, your best bet is probably to use the official NORAD Track Santa app for Android. It offers all the same things as the iPhone version (as pictured to the right), and it’s also free.

Santa Tracker from Value Apps is fairly boring yet useful for little ones. Got little kids you need to get to sleep way before midnight? NORAD and most Santa trackers I’ve seen over the years don’t help. Santa only draws near to your home around the midnight hour.

The Value Apps app simply draws a short line from Santa to near your home location. Like I said, pretty boring. But if you have little kids, that’s proof positive that Santa’s almost at your house, so they need to scurry to bed.

Countdown To Christmas from Onteca is a free app that shows images of Santa caught as black-and-white pictures, which are pretty funny. They also make a paid app with a global tracker, but I didn’t find it worthwhile last year. This year, it still doesn’t look worth the $2.

I don’t have a BlackBerry phone, but CrackBerry recommended the Santa Tracker app last year. I see it’s still offered this year, and the price as dropped from $3 to $2.

St. Nicholas is hip to the ways of social media. With the help of NORAD, he’s got accounts on Twitter, Facebook and Google Plus.

On Facebook, information (but not a lot of updates on location) are provided through the NORAD Track Santa Facebook page: Over at Google+ is the NORAD Tracks Santa Google+ page. As with Facebook, it’s more about the NORAD tracking operations rather than updates on where Santa is: 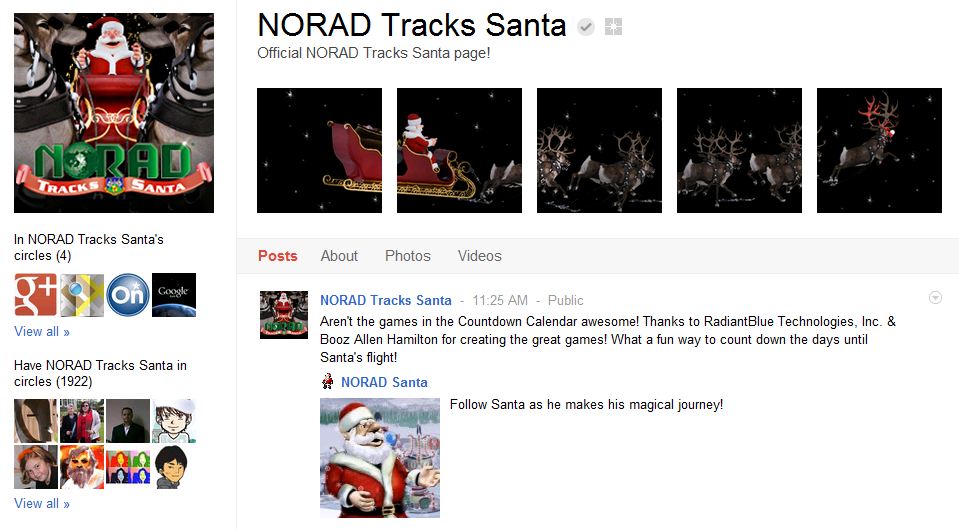 Looking for more? There’s an unofficial wiki all about NORAD’s Santa tracking efforts. There are also news articles each year about the service. Here’s a recent AP one. Want to make a personal video from Santa for your child? Here’s a service we liked.

Also, if you haven’t seen it, Google’s got a pretty cool Happy Holidays logo going right now. A search on Google for Christmas brings up a special decoration (searching for Hanukkah or Kwanzaa also brings up decorations for those holidays). And if you need snow, search for “let it snow” on Google. You’ll get plenty.

Merry Christmas from all of us here at Search Engine Land!