Anyone watching tonight’s US Presidential debate between John McCain and Barack Obama heard both candidates speak directly to “Joe The Plumber” several times. No, it’s not a fictional Joe. No, it’s not Sarah Palin’s Joe Six Pack. He’s a real person that Obama spoke to earlier this past weekend about economic concerns and taxation. But […]

Anyone watching tonight’s US Presidential debate between John McCain and Barack Obama heard both candidates speak directly to “Joe The Plumber” several times. No, it’s not a fictional Joe. No, it’s not Sarah Palin’s Joe Six Pack. He’s a real person that Obama spoke to earlier this past weekend about economic concerns and taxation. But if you’re turning to search engines to find more about him, as many are, there are a lot of surprises along the way.

First, let’s look at what Google has for a search on joe the plumber: 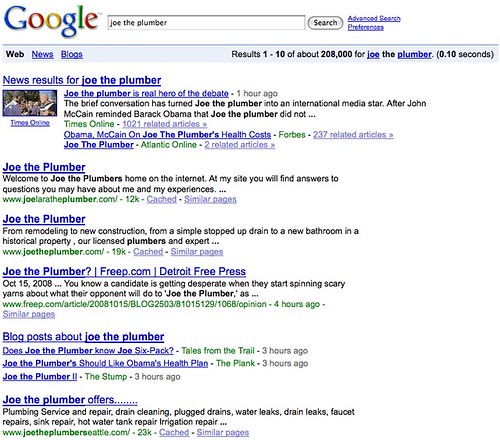 The results are already quickly changing as Google starts to insert some timely news content into regular results, such as the article from the Detroit Free Press appearing in position four (counting the “News Results” box at the top as position one). This will dramatically change as the day continues, as “Joe The Plumber” takes on an entirely new meaning.

But look at the sites in positions two, three and six. These are real plumbers! (OK, now famous Joe is a real plumber, but none of these folks were in the news — yet).

I can only imagine what type of traffic they’re getting — and how puzzled they were if they noticed a spike in visits or phone calls. In fact, when I twittered about this, Shawn Collins twittered back that one of them (joetheplumber.com) had indeed gotten offers for his site already.

It’s way too early for Google Trends to report traffic for any of these sites, but check out this query in about a month, and perhaps we’ll see some spikes.

Speaking of Google Trends, that shows people are seeking more about the much mentioned plumbing Joe. The current Google Trends home page lists “joe the plumber” is in the top 10 of searches that have suddenly risen in popularity:

The screenshot at the top of this article shows how if you drill in, you can see Joe’s not just suddenly famous — he’s “volcanic” in search popularity:

Of course, Joe Wurzelbacher is the Joe who was mentioned in the debate. The third query reflects people trying to find the video clip of him talking to Barack Obama on YouTube. Many of these will likely get pulled for copyright claims. But you can find plenty right now with these searches at YouTube and Google Video. Or try this one at just launched video site Videosurf.

Below is a clip from CNN — since it’s theirs, I think it will stick around:

To read more about Joe and his talk with Obama, there are plenty of good articles are appearing. Here’s one from Times Online. There are many more on Google News.

That brings me back to the Google results. You can see how Google News has a block of stories at the top of the search results. Blog results are also integrated midway down. And elsewhere? 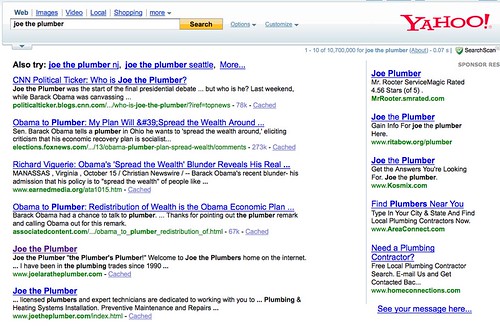 Yahoo’s got two news stories already at the top of the page, along with fast articles pumped out by two other sites. Below that are some of the real plumbers I’ve mentioned, along with yet more non-famous “Joe plumbers” out there (joetheplumber.net, joehillmanplumers.com, joe-plumber.com) 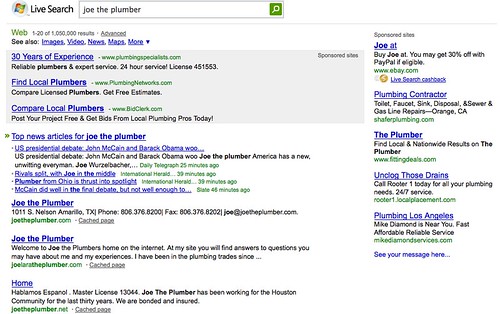 Microsoft’s Live Search is all about real plumbers. You get news articles tucked at the top, similar to Google, then the page is full of regular Joes who do plumbing.

Overall, good marks to all the search engines for getting news content in there. It’s hard to declare a winner. I think the news clusters at the top of Google News and Live Search are more noticable for those seeking the “newsy” Joe, but these types of things are also sometimes ignored for “real” results — and in that case, Yahoo might do better for some searchers. With all of them, as I said, you can expect the results to dramatically change as the days go on.

Notice that Yahoo and Microsoft both were showing ads while Google wasn’t. None of those ads are political in nature. However, I had a report from Michael Gray that he was seeing some interesting ads that I’m guessing were political in nature. And Eric Frenchman who handles the search ads for the McCain campaign twittered to me that some debate ads were out there. He then did a post about what was showing and how the McCain campaign got prepared in advance for this being a popular term:

Within minutes after becoming a debate topic we put it into the search campaign sending it into our Rhetoric versus Record landing pages.  We were the only one there for about 90 minutes and then the advertisers started.  Now you have the RNC (!) and a host of others (see below) but I can’t find an Obama ad and I checked in multiple states.

Here in Southern California, I don’t see the ads. That’s because they are targeted to particular states. Want to see them? Then you have to trick Google into thinking you’re in another area. Here’s how.

Google allows ads to be targeted to a variety of metropolitan areas in the US (DMAs). You need the DMA code of a place where the ads are showing. From Eric’s post, I can see New Hampshire is being targeted. So, I need a city in New Hampshire and its DMA code.

Google has a handy page for this here. I see that all of New Hamsphire uses DMA code 506. Now let’s put that to use.

When you do a search on Google, you’ll see the URL has a bunch of stuff along with your keywords, like this:

You want to put &gm=### at the end of this, where the number is the number of the DMA you want to view. So that means for New Hampshire, I do this:

Now the bad news. When I do this, none of the ads that Eric is showing in screenshots on his site appear for me. Rather than seeing what he’s captured, I only get one at the moment from CafePress selling t-shirts. So, you’ll see what Eric was seeing below. Hopefully he’ll forgive me after the fact for copying them, especially since they document that McCain beat the Obama campaign to the search punch with the ads:

There’s a simpler way of seeing ads in particular areas. That’s using the Google AdWords Preview Tool. There, you enter your terms, pick the area you want to simulate being in, and the ads should appear. But even doing this, I still don’t get anything other than the CafePress ad right now.

This makes me think that suddenly, a lot of people who had non-political ads have blown through their budgets — or that Google’s quickly put a hold on ads related to this term — or both. Or the tool’s not working. I’m at a loss!

Also keep in mind that for any query, if you’ve run it several times in a row, Google will stop showing you ads for it. In that case, you need to clear your cookies or try searching with a different browser.

Finally for real time chatter about those reacting to Joe, check out what people are twittering for joe the plumber on Twitter Search.

Postscript: Debate buzz clogs Web site of Joe Francis, plumber from Amarillo from the Dallas Morning News covers how the owner of joetheplumber.com has had offers of up to $800,000 for his domain, 1,000 curiousity phone calls and over 100,000 emails at the time the article was written.

I’ve also been watching the three sites I listed as being in the tops for Google for a “joe the plumber” search, for changes. So far, only joetheplumber.com has had any signficant ones — a logo with the word “Plumber” in “Joe The Plumber” crossed out to say “President.”